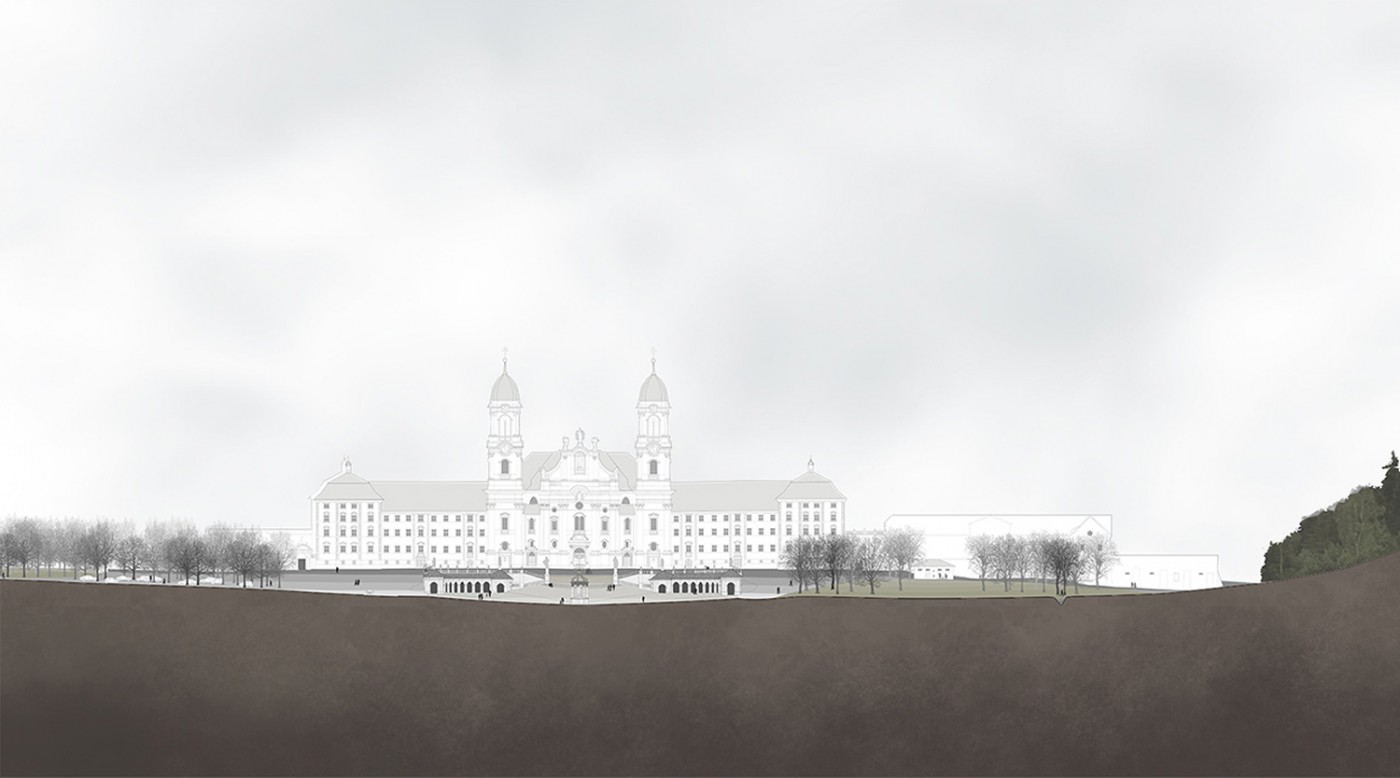 Klosterplatz Einsiedeln, which is edged by the abbey and cathedral churches and the prestigious facades of the adjacent buildings, is the largest ecclesiastical square north of the Alps. As an important place of arrival and gathering, it refers to the Europe-wide network of pilgrim routes that have been etched into the landscape over time. In contrast, the adjoining pastures and the paths trodden by locals, which have been worn into the paved areas through centuries of use, is indicative of the simple village and its choreography of everyday life. Although the connection between monastery and village—between the sacred and the profane—has increasingly dissolved over recent decades, a few targeted topographic interventions have renewed the role of the square as a mediator between these worlds.

Part of a Continental Network

Over the centuries, site-development systems serving economic, cultural, military, and ritual needs were inscribed into the landscape and consolidated by the establishment of infrastructures. Einsiedeln’s location north of the Alps also made it an important center and a point of intersection in the network of pilgrims’ routes— to Jerusalem, Rome, and Santiago de Compostela— that spanned the entire continent. This network was also used to disseminate the knowledge of the time and, especially in the early centuries, to transport a large number of familiar and extraneous plants to and fro between the monastery gardens of Europe. The mighty western red cedars in the abbey’s Abtelhof still bear witness to this tradition.

Klosterplatz is evidence of the dense overlapping of religious and secular territories. The square, which was created when the site was reconstructed in the eighteenth century, was anchored in both worlds as a connecting link between monastery and village: in the mundane sphere, it was a commons belonging to the local population, while in the realm of the sacred it was a fitting threshold to the mighty monastery church, a worthy place of reception for pilgrims and, on holy days, a place of gathering and procession. In recent decades, however, there has been a significant shift in this finely adjusted balance between the two worlds. 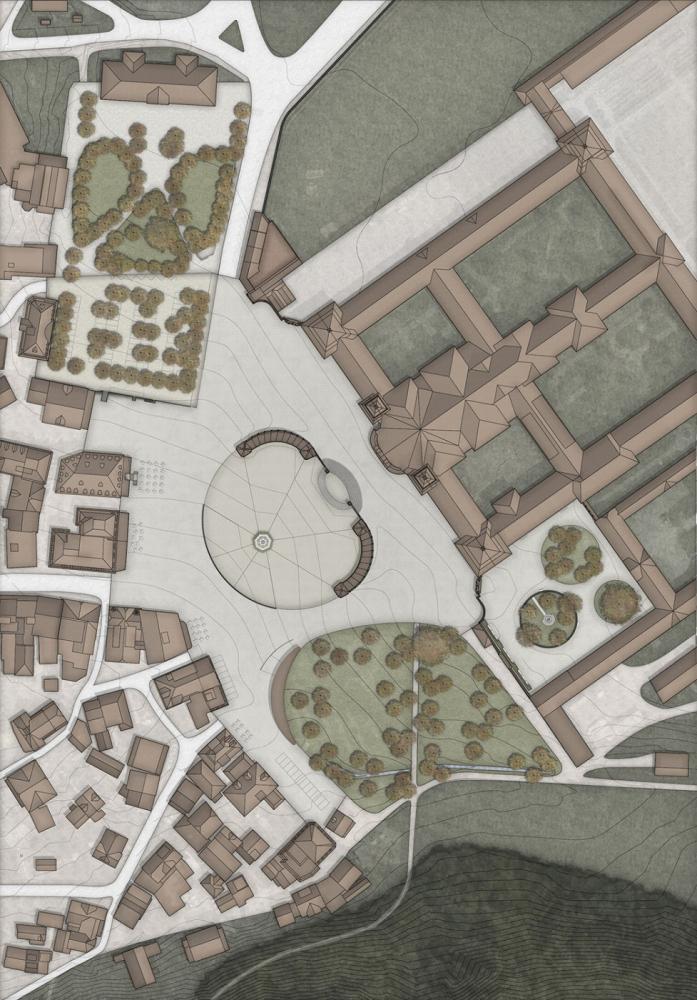 The concept behind the remodeling of Klosterplatz is geared to the urban design of its eighteenth-century arcades. With the help of some few interventions, these arcades are to underline the importance of the monastery forecourt as a central and prestigious meeting place. In line with the baroque design defining the square, the existing convex stairs between the arcades, which lead up to the abbey church, are supplemented by a concave stairway and continued down to the square. A short series of steps below the Marienbrunnen or Lady Fountain complete the oval suggested by the arcades and, thus, define a “square within the square.”

Based on the concept of the Piazza del Campo in Siena, the paved surface slopes down toward the fountain in trapezoids set at a slight angle to one another. The paving, consisting of simple rows of split river pebbles—debris from the once torrential Sihl River that reflect the regional geology— is being replaced. Although the paving stones will no longer evoke the nearby river, at least the color of the surfacing will once again define the square. The fine network of everyday and ritual paths, which has been worn into the paving by centuries of use, will also partly disappear. The course of the individual paths has, however, been recorded and reconstructed on the basis of historical photographs. Future choreographies of daily life and liturgy will give rise to a new network of tracks set in stone.