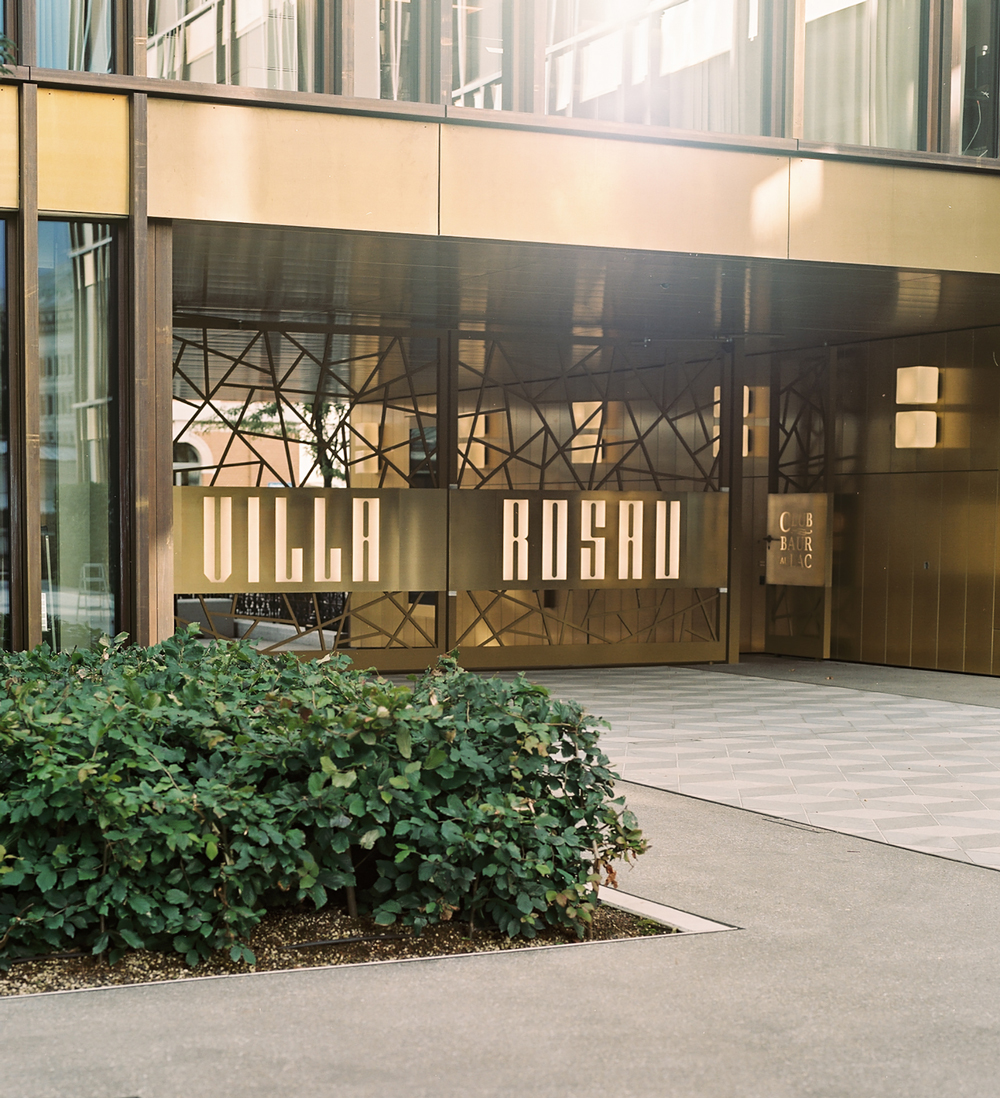 The spirit of the times

The park of the Villa Rosau, then called 'Zum Seegarten', is closely linked to the urban development of Zurich. The garden was created in the mid-19th century on a peninsula outside the city walls. The dismantling of the city's fortifications and the steady pressure of industrialisation wrested more and more space from the lake. Quayside and perimeter block development made the originally idyllic location of the villa on the lake disappear and integrated it into a new, urban environment. The park of the Villa Rosau was built in the landscape garden style and continuously slightly modified. It is characterised by the social changes that took place at the time of industrialisation. An overlapping of architectural elements from the French garden and the idealised English landscape park developed. Before the redesign, only a little of the old structure remained. 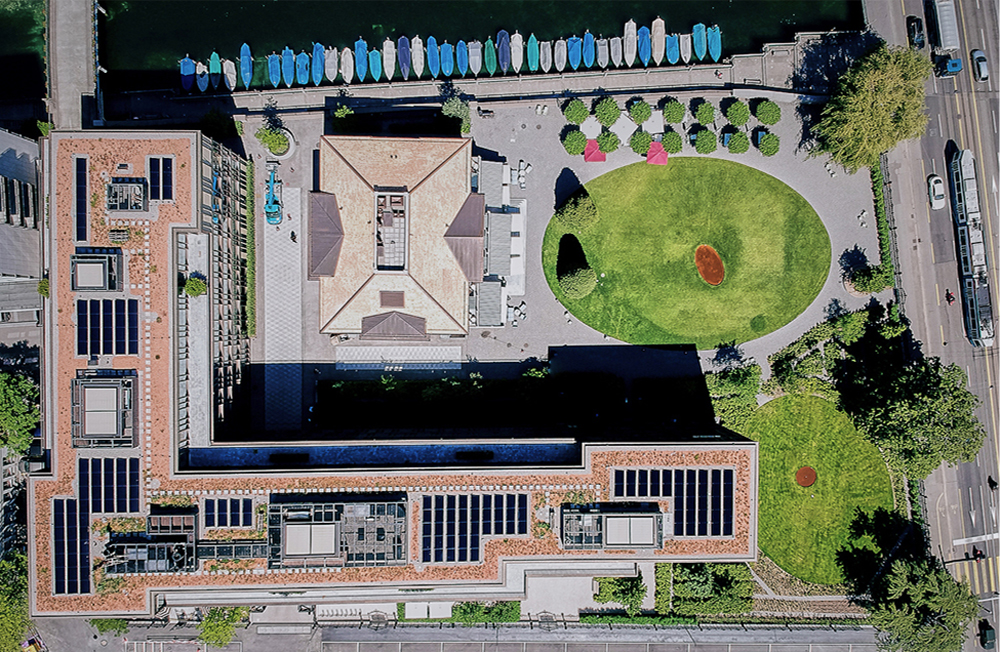 The prominent location of the Villa Rosau park in combination with that of the Hotel Baur au Lac on Lake Zurich is a historically significant witness to the city's expansion. These clearly visible time horizons are emphasised by the deliberate, urbanistic placement of the new building in the garden instead of next to it. The garden flows around the villa and the new building and allows the L-shaped perimeter block development to merge with the historic building. The original style of the 19th-century villa garden, with its overlapping of architectural and organic forms, is thematised and divides the garden into three different areas that meet the new requirements for use.

In the Claridenstrasse area, a front garden area to the building was created. The office space is accessed and provides a seating area for the publicly accessible gastronomy in the north-western ground-floor part of the new building. This front garden area is interrupted by the villa's driveway, through which the historic building is connected to the urban space. In the eastern part of the area is the garden, which is used exclusively by visitors to the villa. 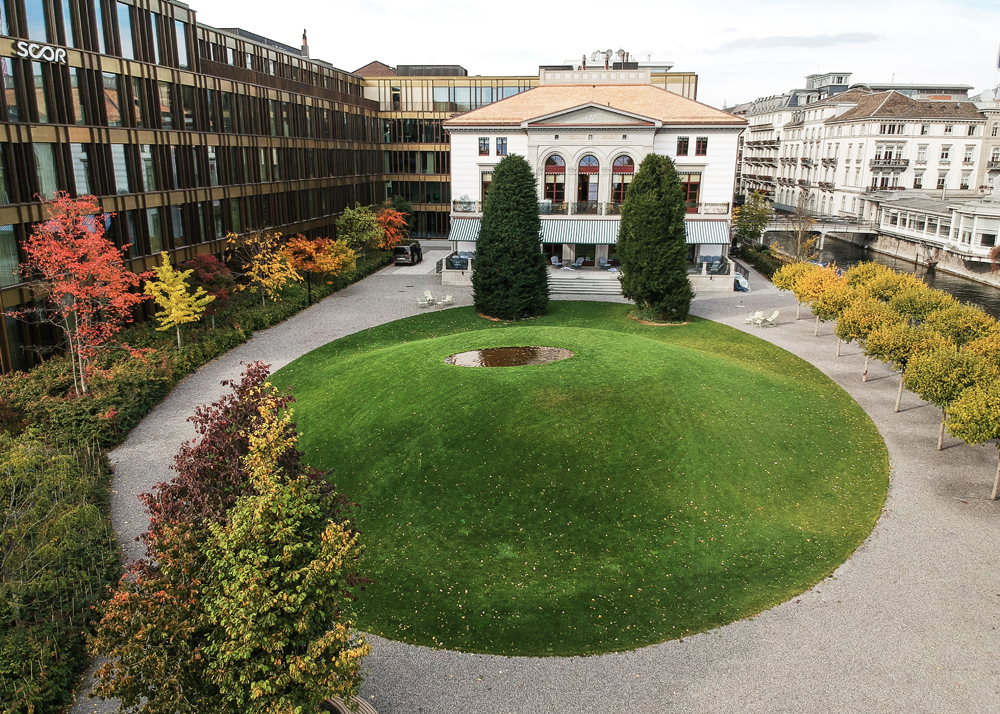 The fences and gates

The enclosure of the area tells the site's story and is also of great importance from the point of view of monument preservation. The fences and gates used were already existing and were restored through elaborate craftsmanship. The garden is enclosed along Claridenstrasse and General-Guisan-Quai by a forged, magnificent iron fence standing on a base of hard Ticino gneiss. Along the Schanzengraben, the garden is bordered by the renovated bank wall. The railing on the top of the wall has been restored and serves as a fall protection. The historic garden gates remained in their locations as 'silent gates'. The access points created by the new requirements were designed as new gates in the style of the historic fence. 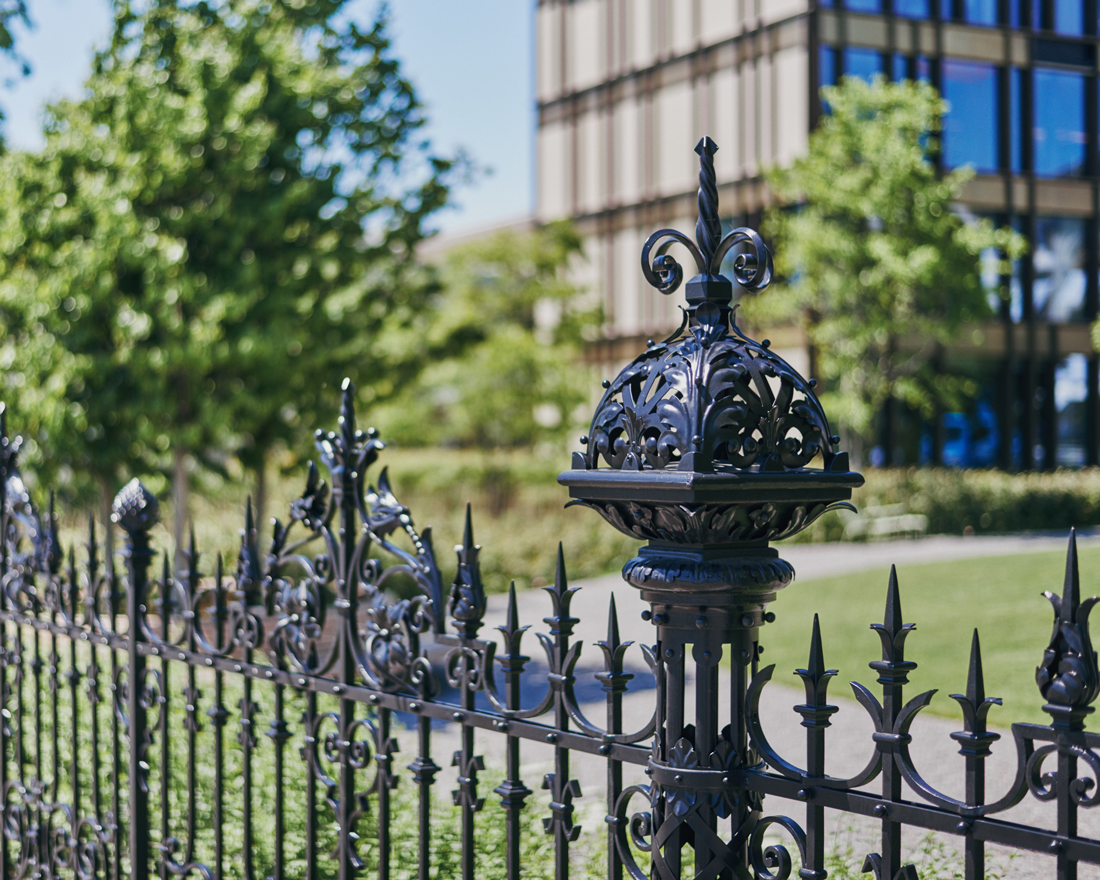 The garden fence is accompanied for much of its length by a hedge of evergreen privet. The hedge was dispensed only in the northern front garden area, which is used as a seating area for the public restaurant. The urban reading of the front garden in Claridenstrasse is also shaped by the buildings opposite and their use. Based on the paved areas beginning at the facades of the Tonhalle the Kongresshaus, the front areas of the Rosau commercial building are also designed in mineral form. Behind the fence or hedge, a terrazzo surface serves as access to the offices and a lounge area for the cafeteria and public catering on the ground floor. The polished hard concrete pavement stands out from the pavement in terms of its value and refers to the floors in the interior. New trees were planted within the paved areas to reflect the garden theme despite the hard ground.

The access road to the historic building was also given a remarkable floor design. A pavement of polished asphalt runs from Claridenstrasse through the ground floor of the new building to the wall at the Schanzengraben and frames the villa on three sides as a forecourt. To emphasise the access and the prelude to the villa and make it appropriately representative, an inlay of natural stone was "rolled out" as a symbolic carpet. The inlay consists of diamond-shaped slabs of Guber natural stone, the surface of which was processed using three different methods. The bush-hammered, flamed, and rope-sawn stones create a three-dimensional pattern that refers to the classicist parquet floors of the historic building. 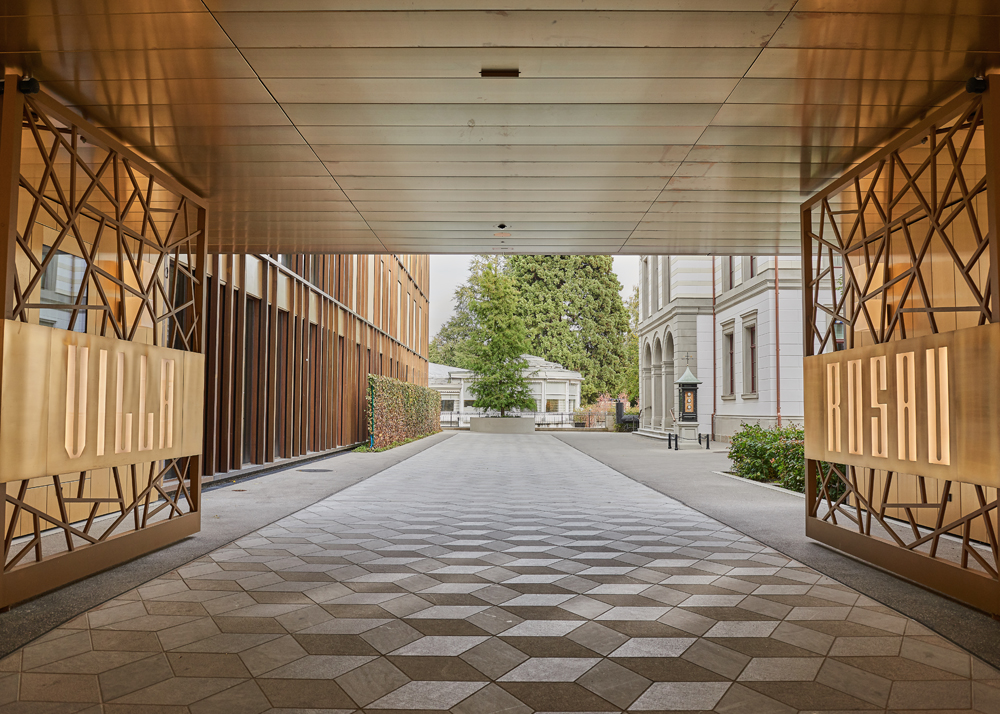 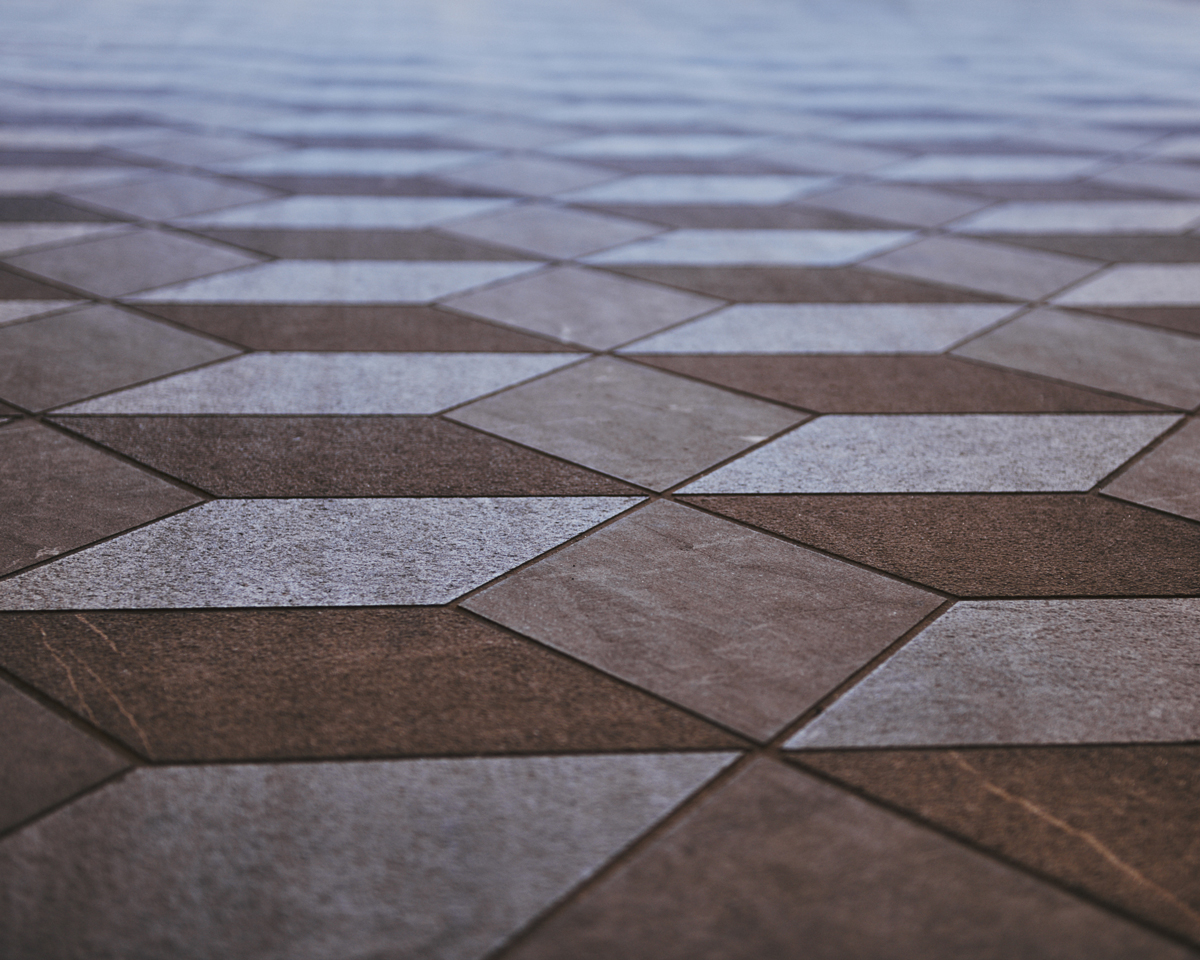 Starting from the villa's forecourt, the chaussured garden path extends to General-Guisan-Quai through the garden of Villa Rosau, which can be described as a tree park-like complex with a central lawn. The existing cedar at the corner of General-Guisan-Quai with Claridenstrasse, the weeping willow at Schanzengraben and the lime tree form an essential basic framework of the tree concept. The historic yew cones were also retained, but their appearance was proportionally adapted back to the villa. The lawn in front of the villa and the two new trees was elevated by topographical modelling and serves as a filter between the villa's terrace and the street. A path serves as a mirror axis for a second modelled lawn and connects the two parts of the garden. The area in front of the new building, modelled as a depression, creates a topographical interaction between the two garden areas and connects them visually. Physically, however, both places are separated by a hedge.

The garden path also runs along the wall at the Schanzengraben and is in direct context with the twin gardens of the Hotel Baur au Lac and Villa Rosau. A formally cut flank of trees establishes the connection to the garden of the Baur au Lac and forms the physical end of the garden. An outdoor seating area for the guests of the Villa Rosau with a view of the lake was created under the roof of cut lime trees. The motif of the tree flank is also found between the villa and the new building, but here interpreted more softly and formed as a fair grove of trees. 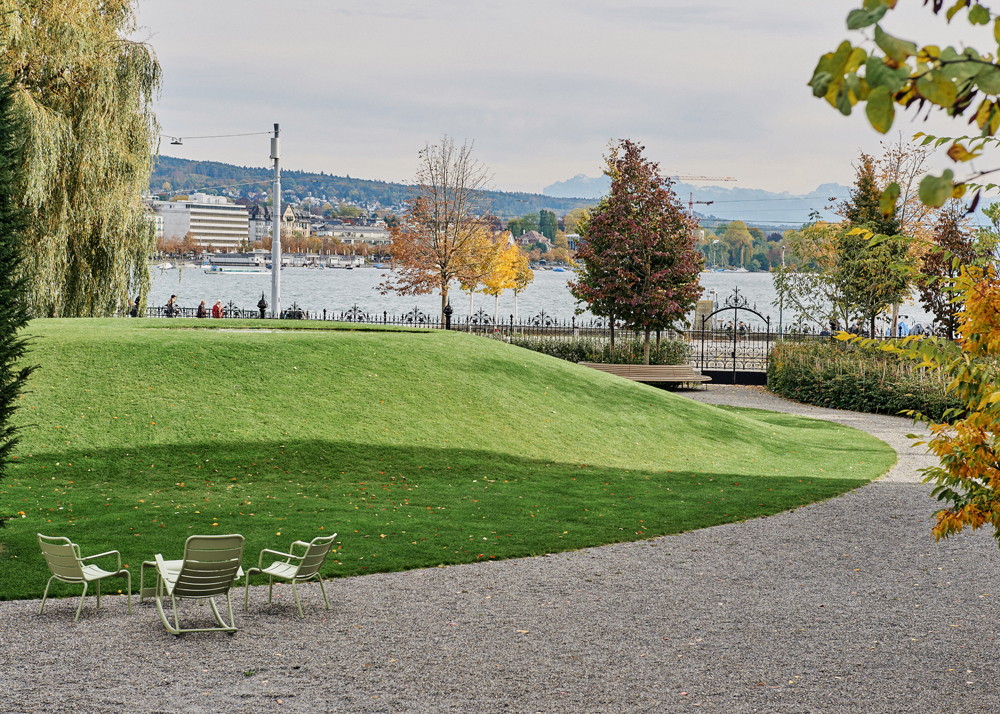 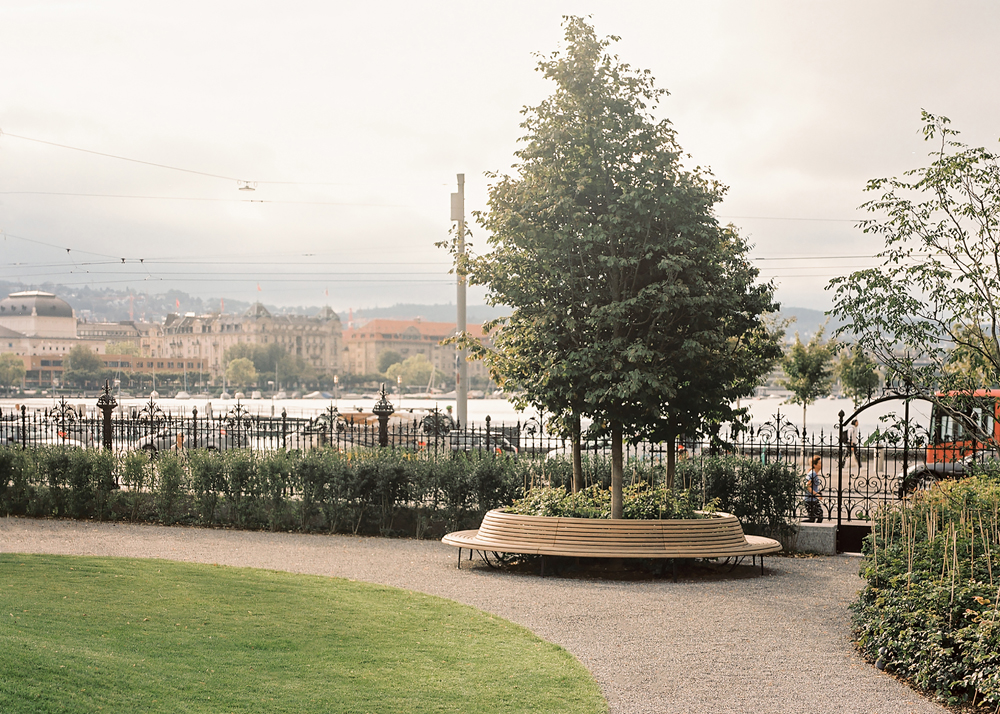 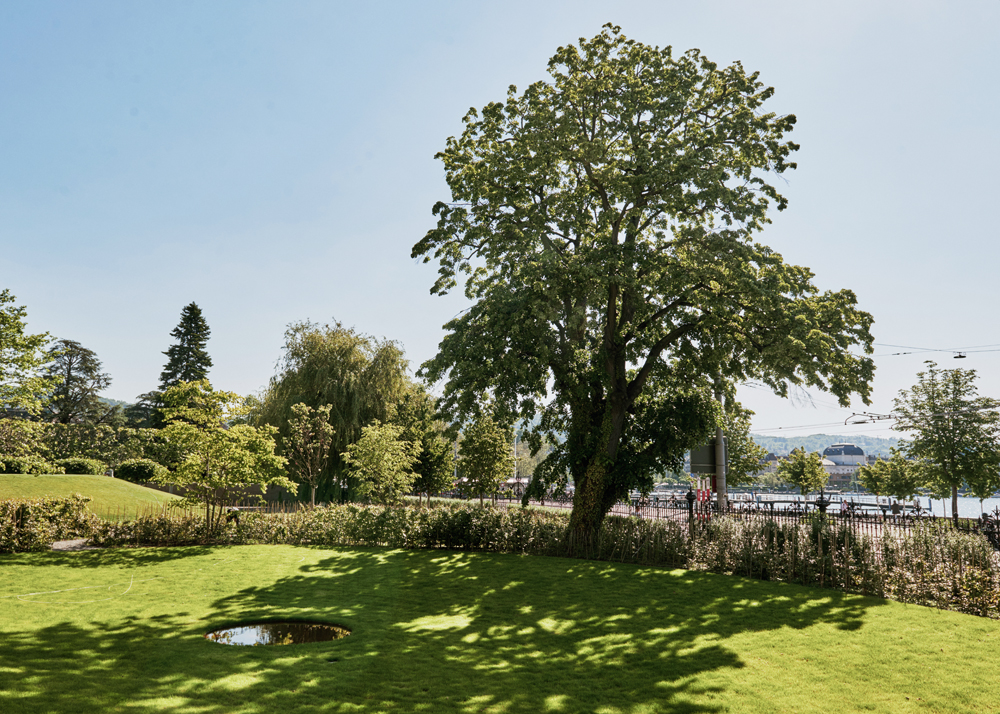 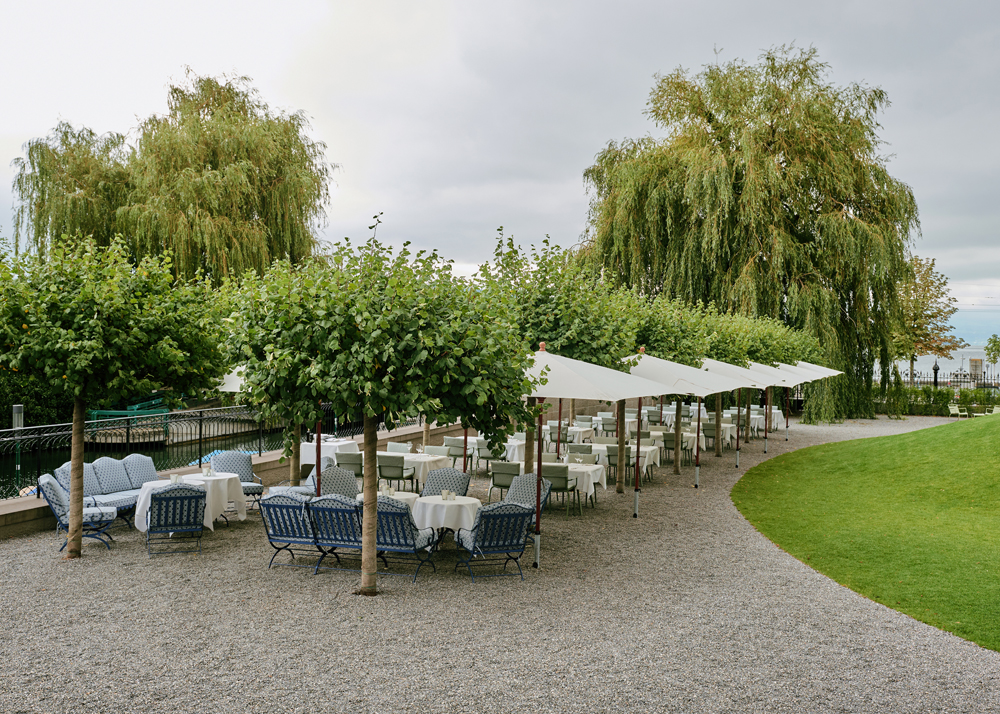 The Villa Rosau and the water

At its construction, the Villa Rosau and its garden were surrounded by water on three sides. After the quay was built in 1887 following the filling in of the lake, the lakeside receded from the Villa Rosau grounds. Three newly introduced elements in the garden now subtly refer to this original direct relationship of the area to the water.

One of these elements is located at the end of the villa's driveway in front of the wall of the Schanzengraben. A massive stone trough with a diameter of four metres forms the spatial limitation of the driveway and represents the theme of water using special planting. A ring-shaped steel water basin within the trough periodically overflows into the substrate and allows for the planting of a bald cypress, which also refers to the exotic woody plants in the garden of the Baur au Lac that corresponded to the spirit of the time. 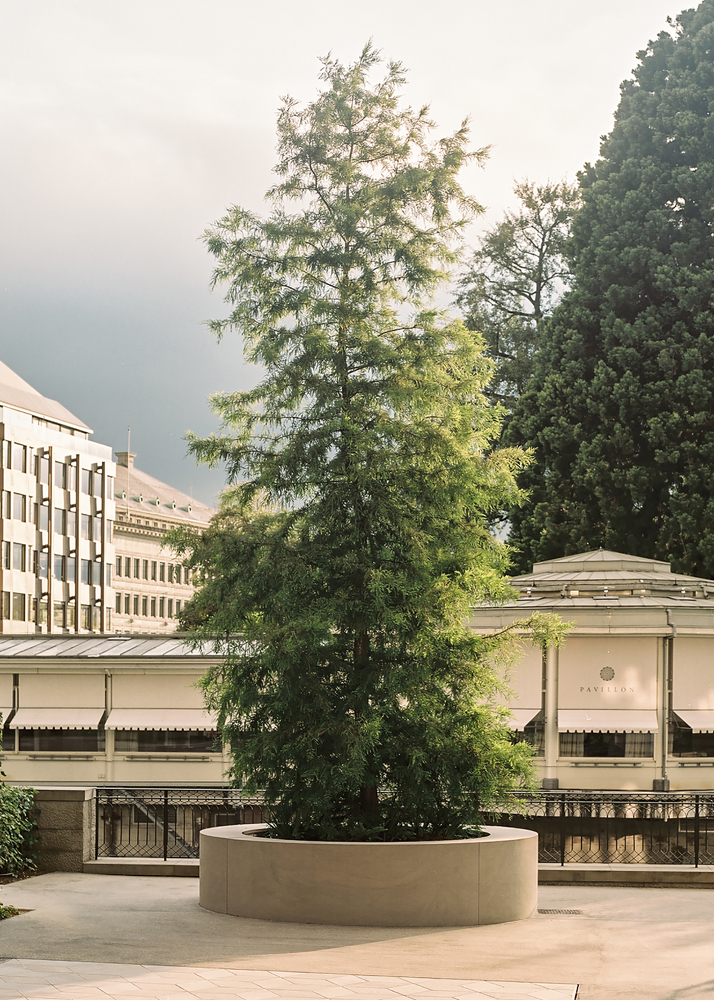 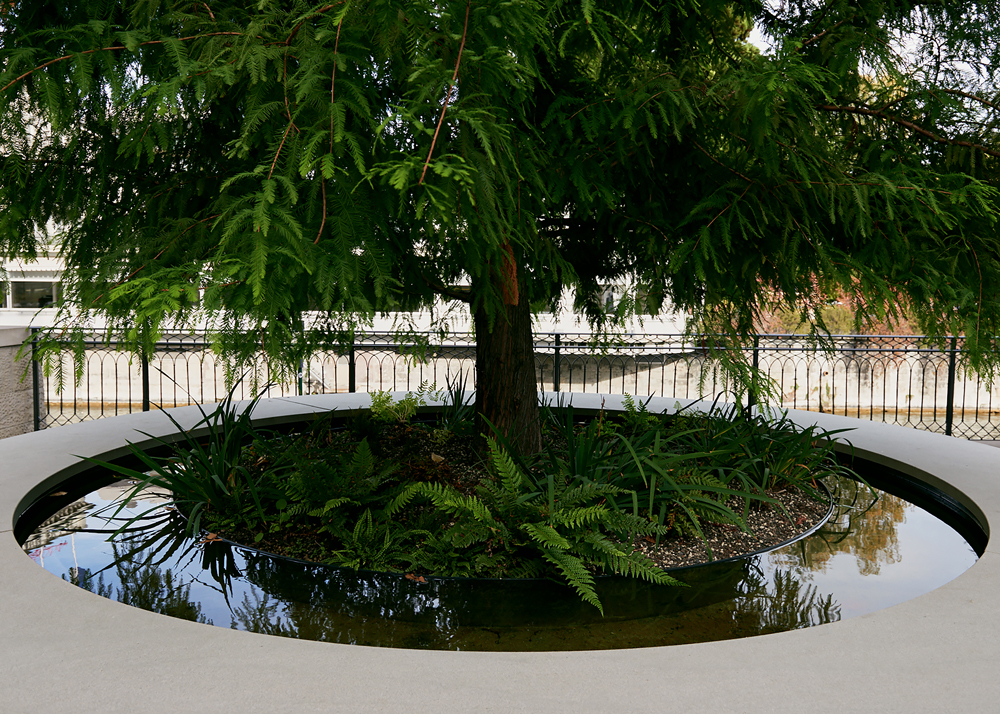 Another element thematises water through its reflective qualities. At the high point of the central lawn, which was modelled into a hill, a water basin was created that cannot be discovered from the garden path. Only when you enter the raised terrace of the villa can you see the pool's water level between the two yew trees. The hill is modelled exactly high enough so that the road, the cars and the quays remain hidden, and only the lake is visible in the background. To the attentive observer, the water level in the garden of the villa serves as a reference to the formerly adjacent lake. Following the principle of the mirrored garden, the modelled depression was also given a round water basin at its low point, which reflects the lake, the clouds and the trees. 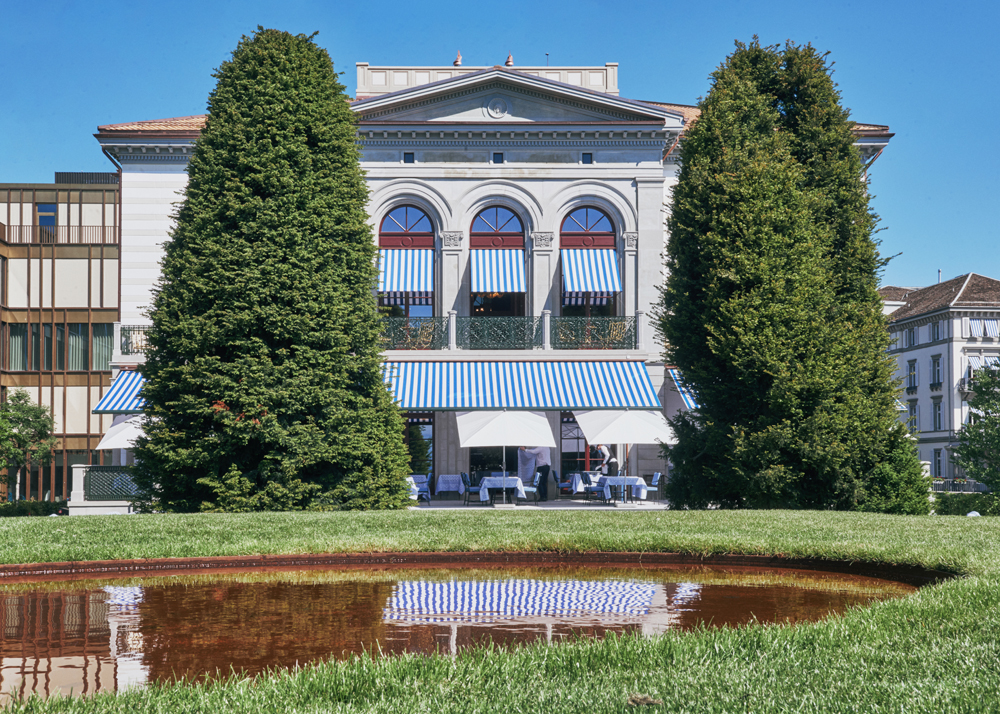 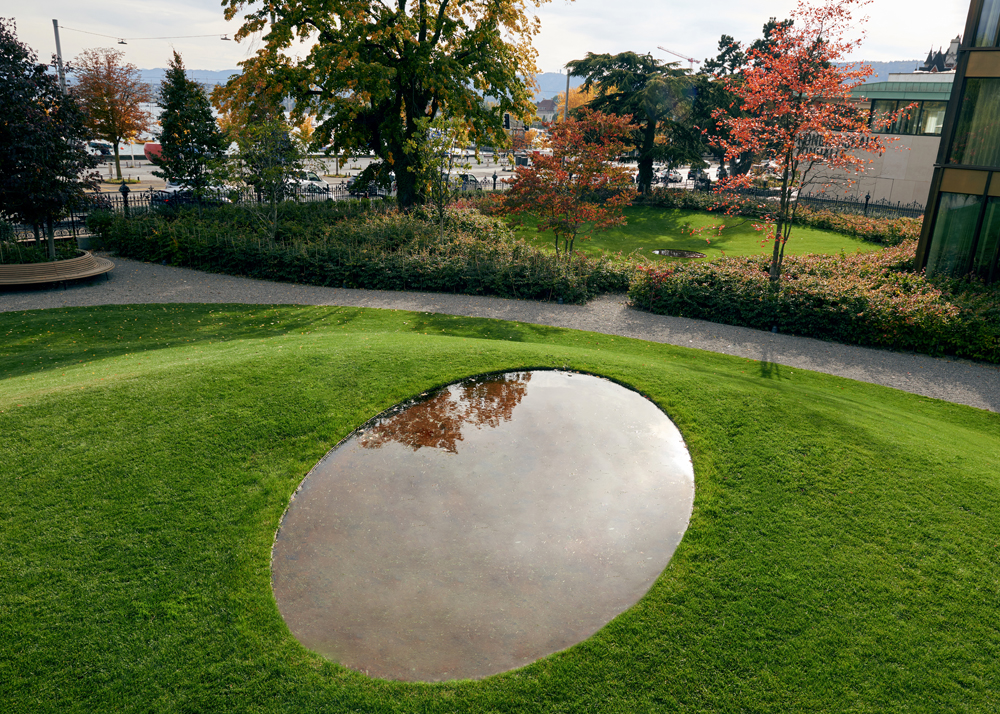 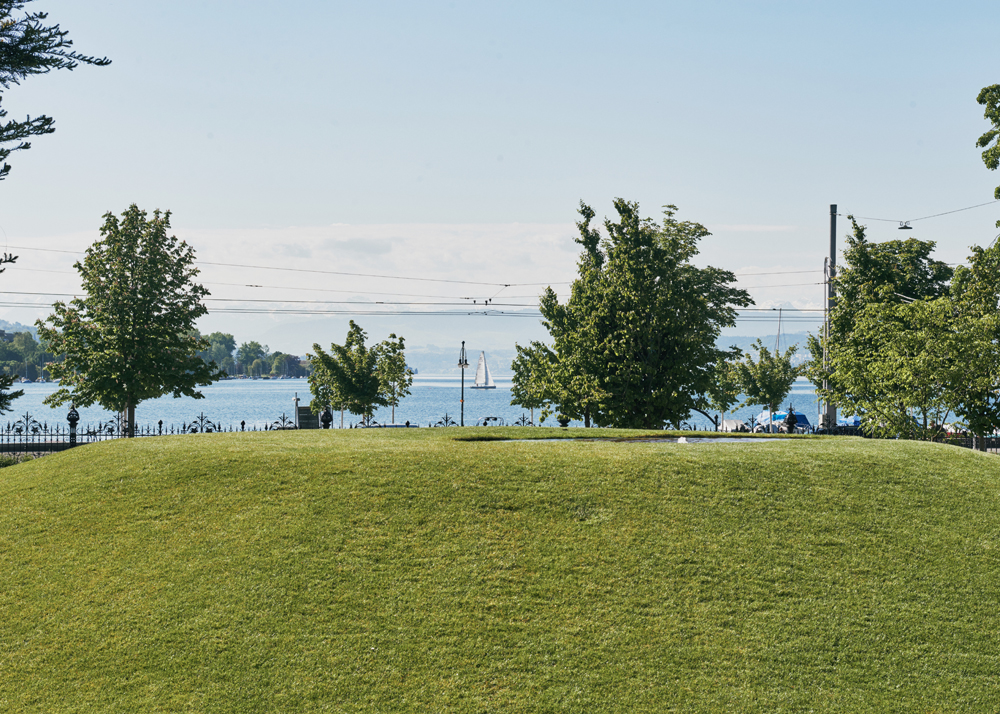 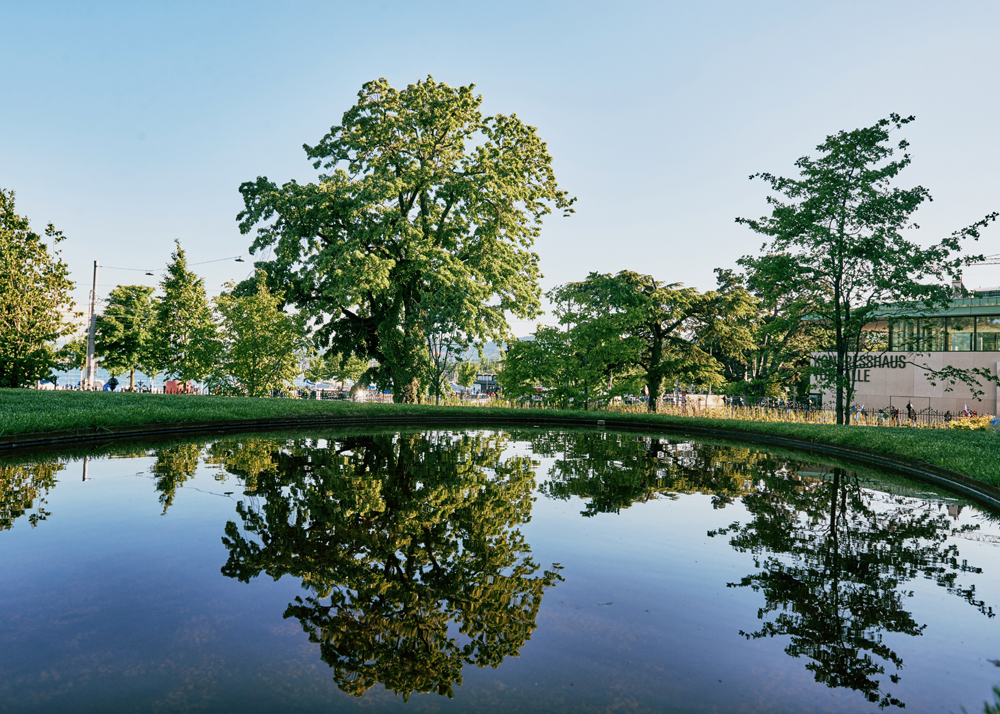 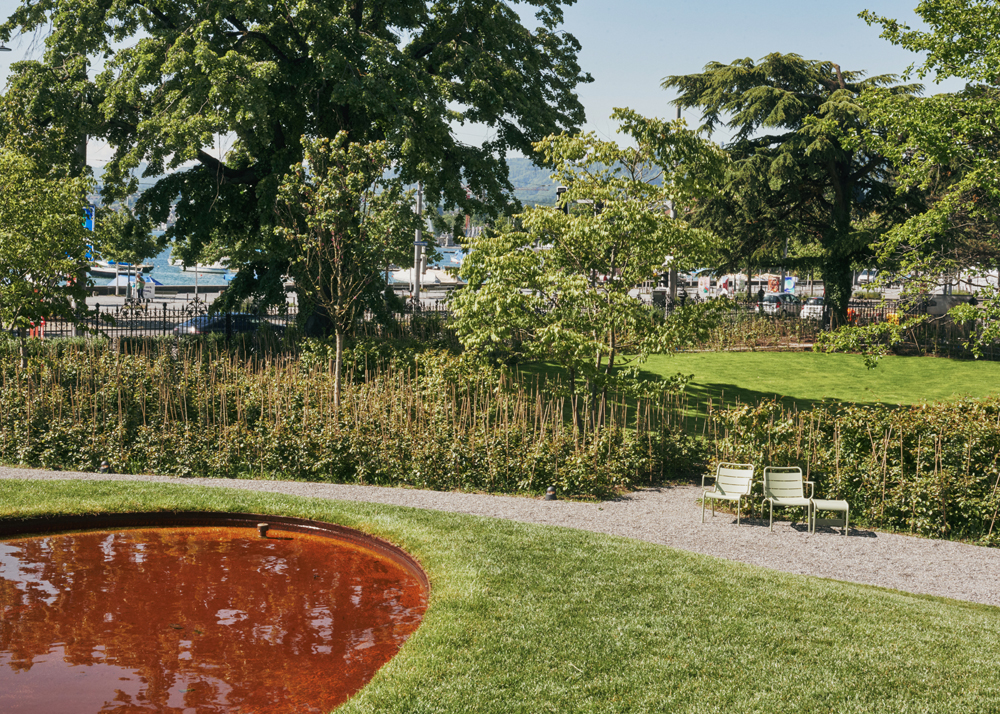 In the third element, water appears only as a metaphor. A weather column in the villa's forecourt welcomes guests and informs them about the weather situation and outlook. Towards the end of the 19th century, numerous weather columns were erected in public squares, parks and promenades. The city of Zurich also had several such elements, e.g. at Bürkliplatz, Bellevue, Limmatquai or Platzspitz. As a reference to the spirit of the times, the Villa Rosau was given its own weather column, whose shell, roof and base were reconstructed according to historical models. Still, the instruments used are from a historical original from the end of the 19th century. Apart from the weather, the weather column also provides information about the time in Zurich, New York and Tokyo and shows the wind direction via the wind vane on the roof. 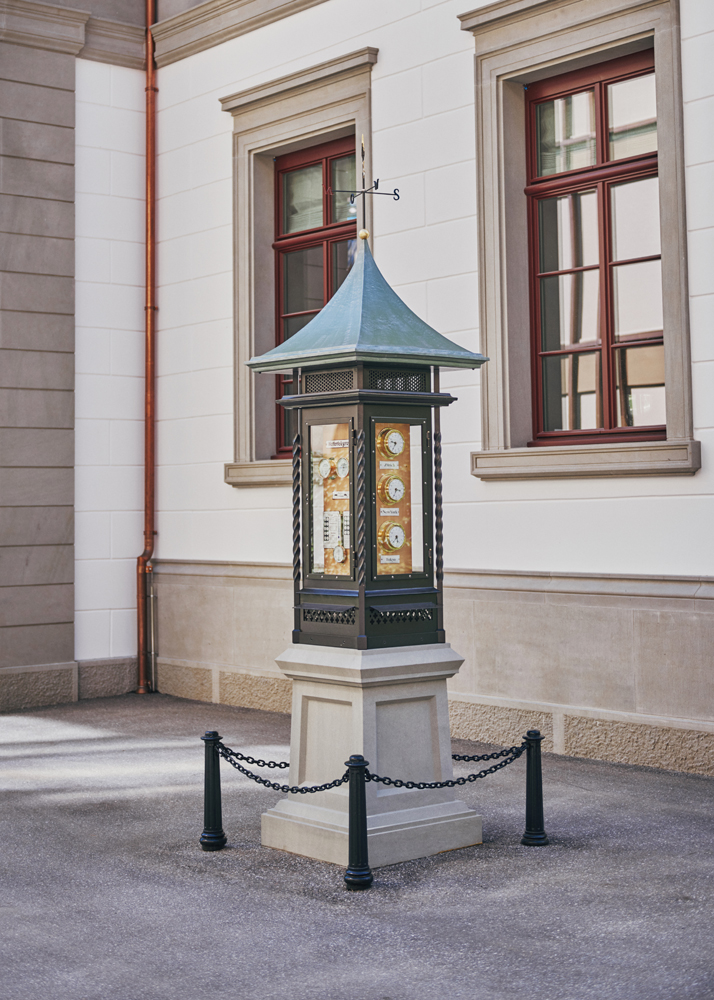 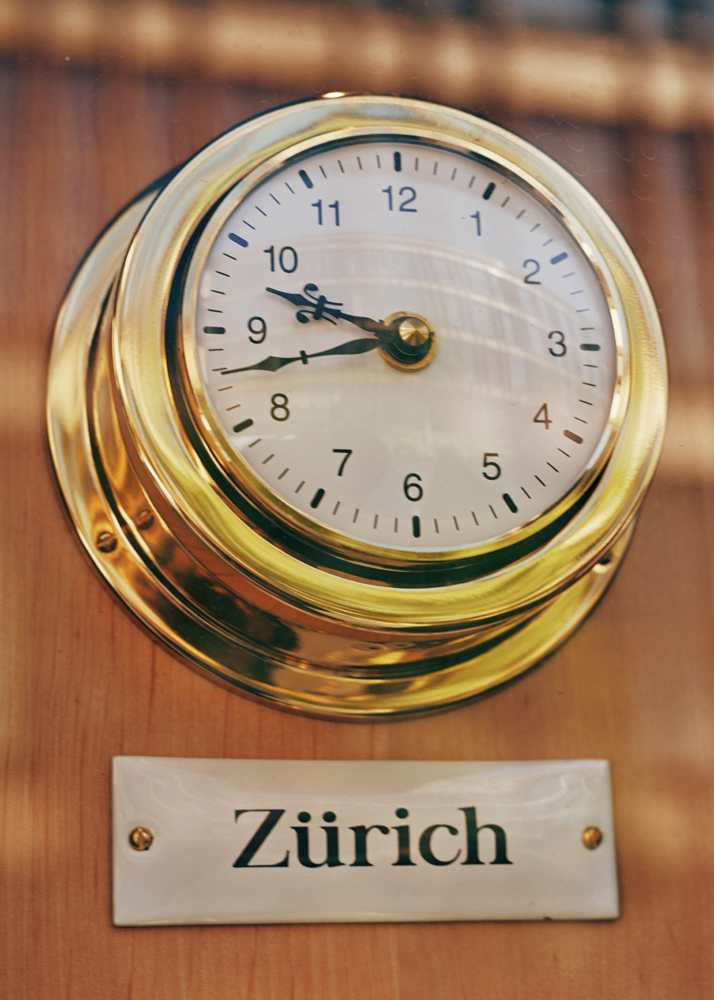 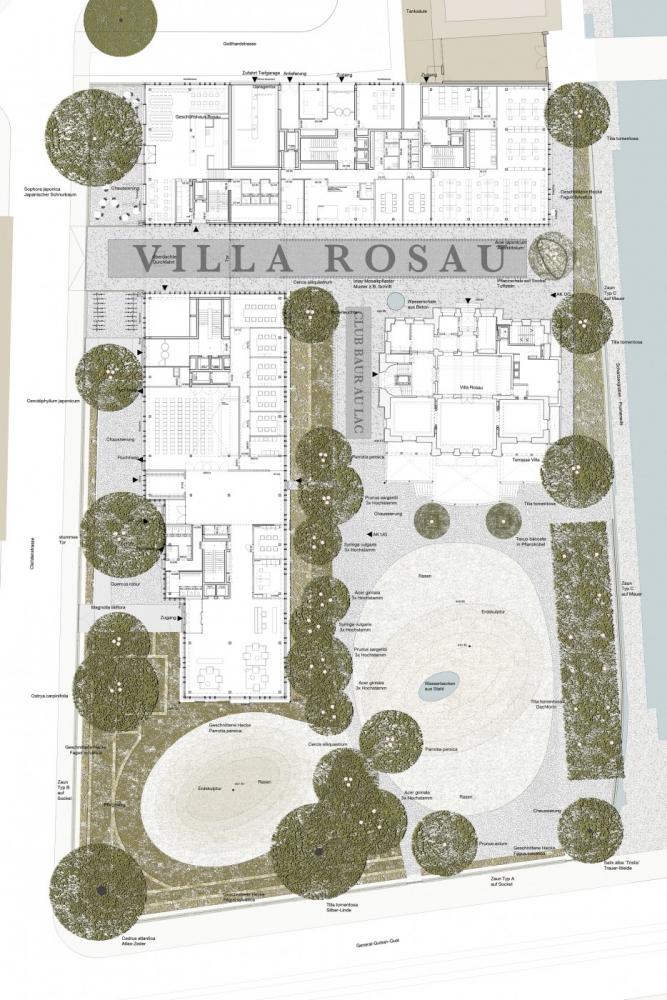 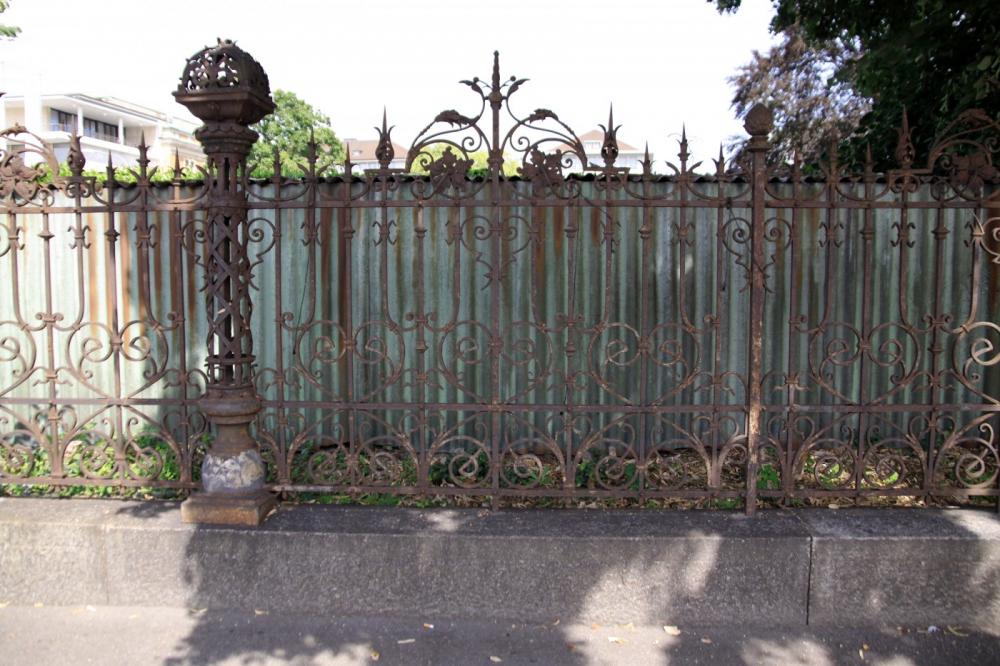 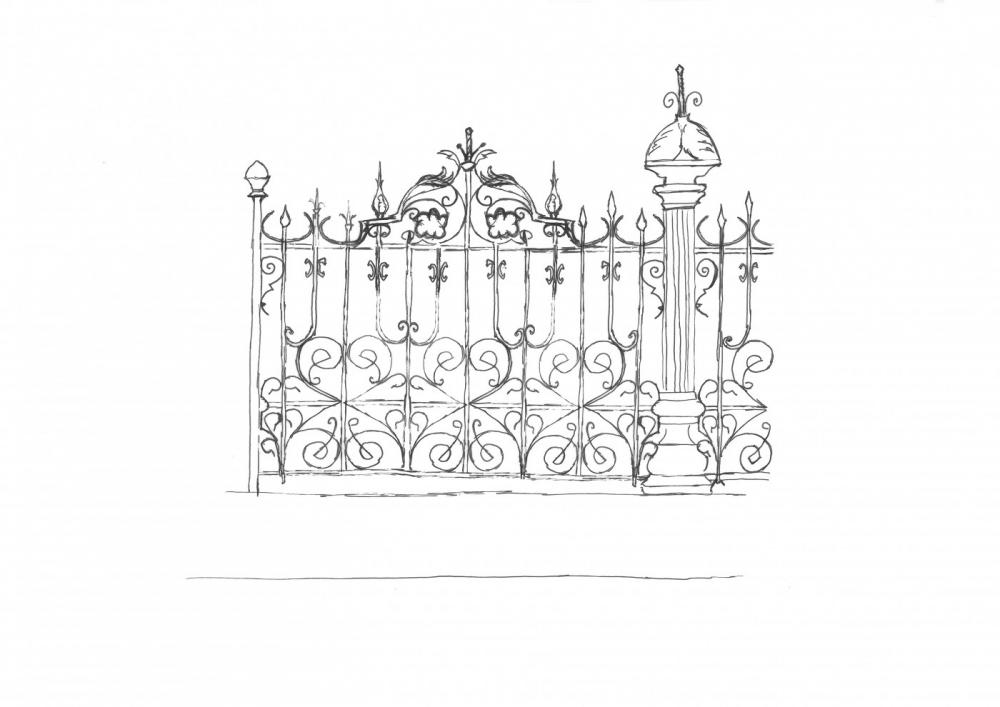 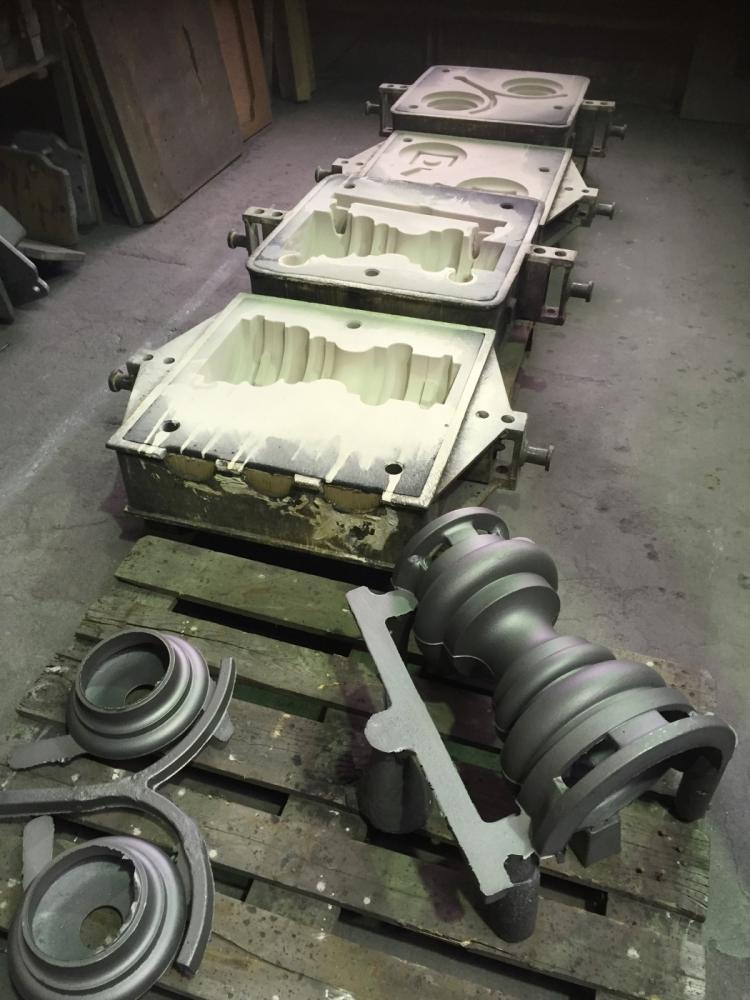 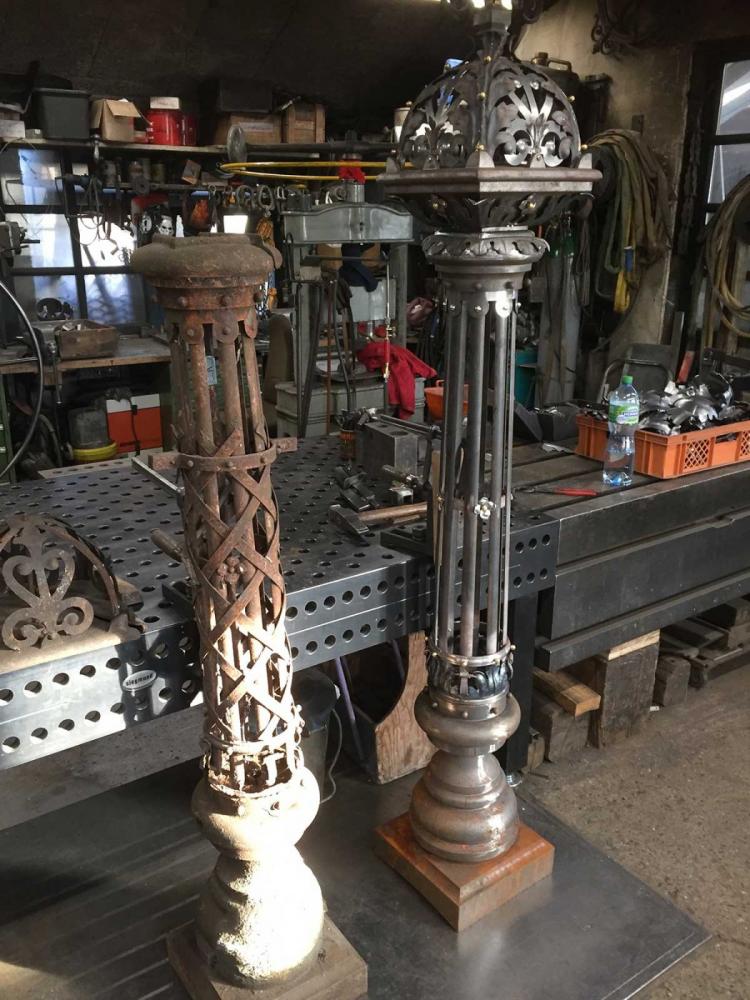 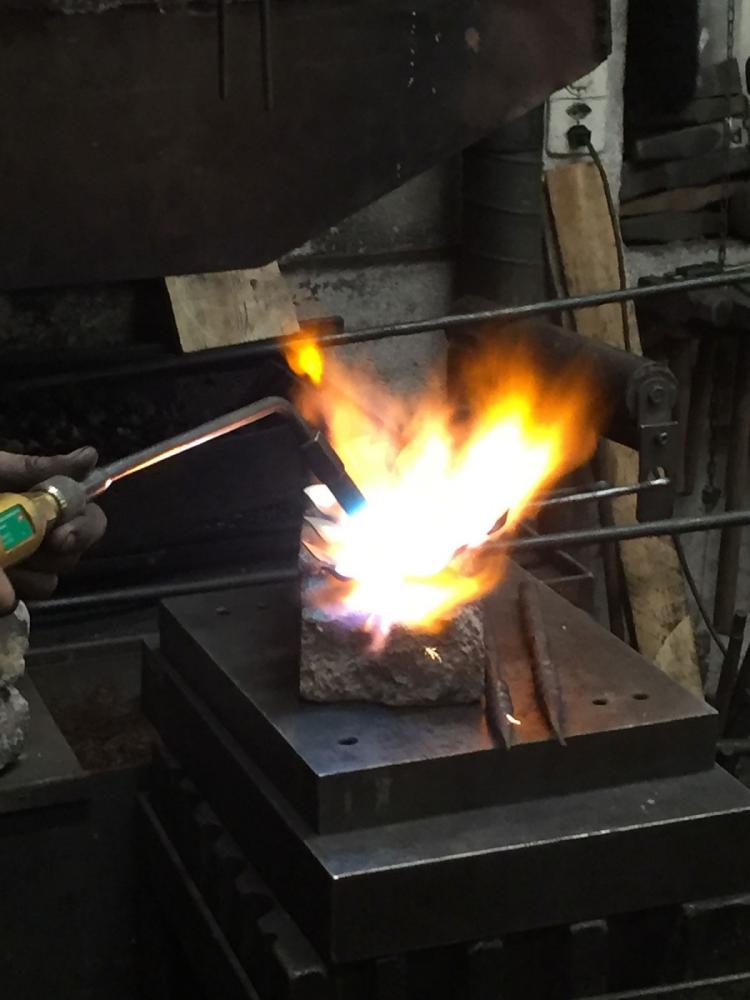 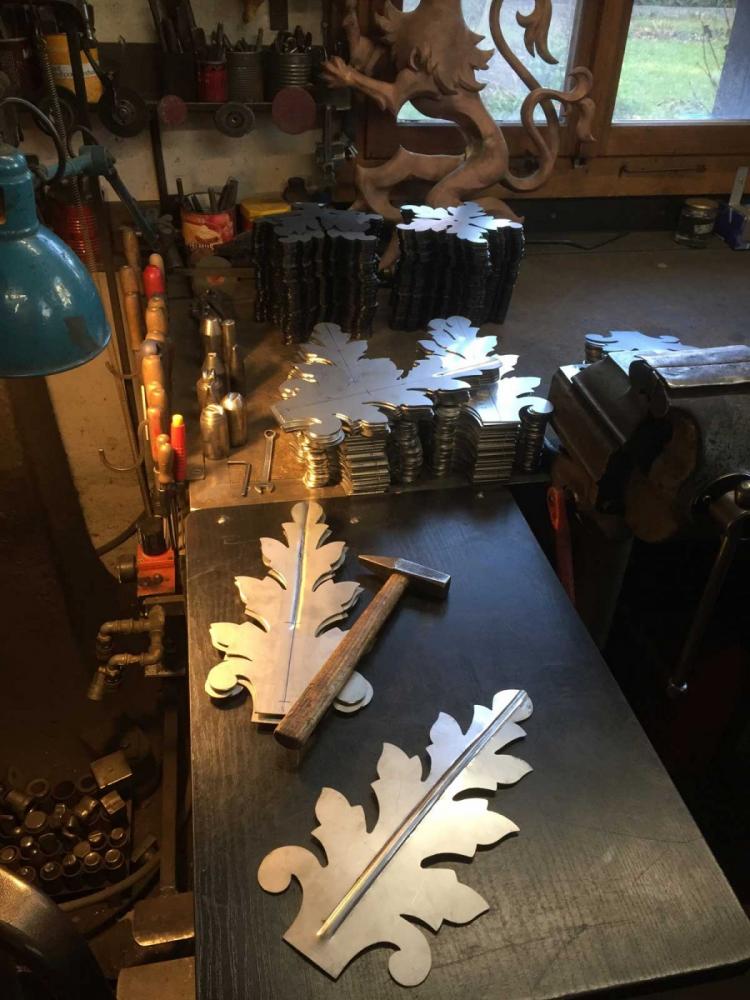