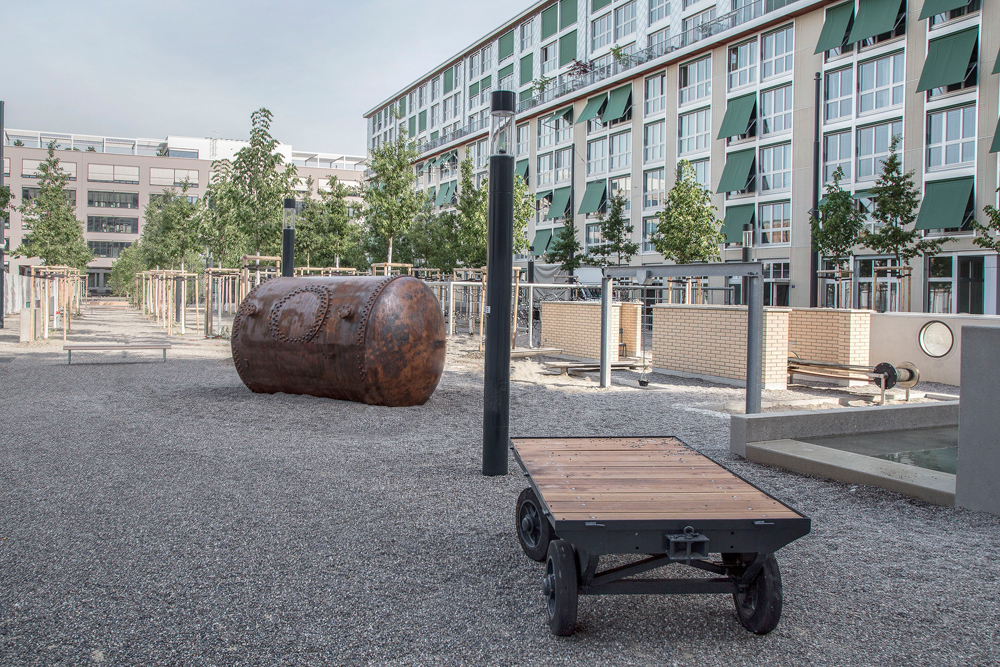 In the course of industrialisation, extensive industrial areas developed in Winterthur, close to the Old Town and with a connection to the railway line, including that of the company Gebrüder Sulzer, Giesserei in Winterthur. After the departure of heavy industry, the former industrial sites, which are now centrally located in the city and within walking distance, are being converted into attractive residential and service districts. Thus, Lokstadt is being created on part of the former Sulzer site as a modern counterpart to Winterthur's traditional old town. In addition to a design plan, the basis for the planning of the open space is the results of workshops with the population of Winterthur, in which the wishes and requirements of the future residents and users for the district were worked out.

The design of a robust, urban open space is linked to the open spaces of the rest of the Sulzer area. The basis of the open space concept is to maintain the legibility of the site's history and at the same time to further develop and redesign the open spaces against the background of the changed uses. The open spaces in the area must be at the same time an access area and a place to stay, a playground, a front garden and a compensation area since the building density is high and the open space is limited. Existing halls and relics, such as tracks and the turntable at the entrance to the site, together with materials typical of the location, such as clinker bricks and asphalt, convey the industrial history of the site.

A continuous, asphalted "city floor" as a connecting and cross-area element enables flexible use and forms the basis for various open space typologies, such as entrance plazas, city gardens and squares. The entrance plazas can be found at various locations in the Lokstadt as a typology that creates identification and marks the entrances to the area. The publicly accessible squares are designed as city squares with an independent choice of plants and materials that correspond to the urban context. Defined anchor points, such as the central playground and the covered outdoor area on Dialogplatz or the listed turntable, refer to the history of the site in different ways and offer space for a variety of uses. In the alley spaces, the "city gardens" form a linear, connecting element between the squares. They refer to the type of garden in the former workers' housing estates. This basic motif is taken over in its dimensions and multiplied depending on its location in the Lokstadt.

The open spaces of the sub-areas still to be developed in Lokstadt are typologically fixed and will be further developed in connection with the adjacent building uses.

The Dialogplatz is a large square with an area of over 6 000 m2 and forms the central place in the quarter. Inspired by the Jardin du Luxembourg in Paris, it is intended to become the focal point for the population and to invite them to stroll and walk - even on hot summer days, because thanks to around 100 trees, the square will be completely tree-covered in a few years. The tree canopy is based on a grid that leads to constantly changing spatial impressions through openings and condensations when walking through the square. The partial densification/doubling of the grid allows for stronger zoning of the sub-areas. 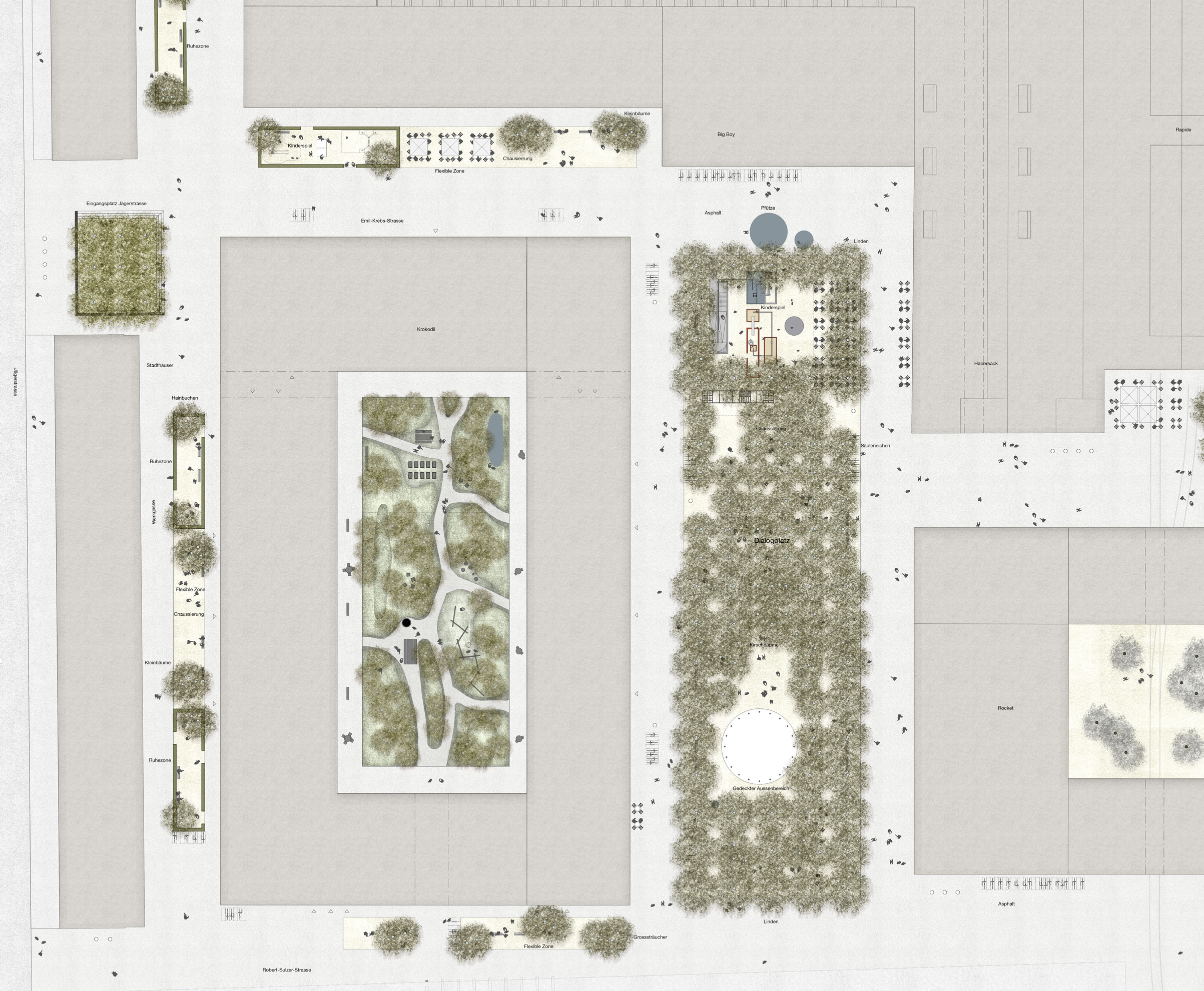 Embedded in the new district on Dialogplatz is the Play Factory. This playground in the shape of a factory is a reference to the industrial history of the area on the scale of children.

Instead of using standard playground equipment, the play factory is designed to encourage children's role-play and to allow for a variety of uses.

Five different areas reflect the history of the former industrial site. The Vehicle Park for small vehicles, the Gravel Works with a crane runway, the Pump House with a paddling pool, a climbing frame and two relics of the Sulzer site provide an unusual play space for children. The play elements are made of concrete, brick and steel and were designed especially for the Lokstadt. 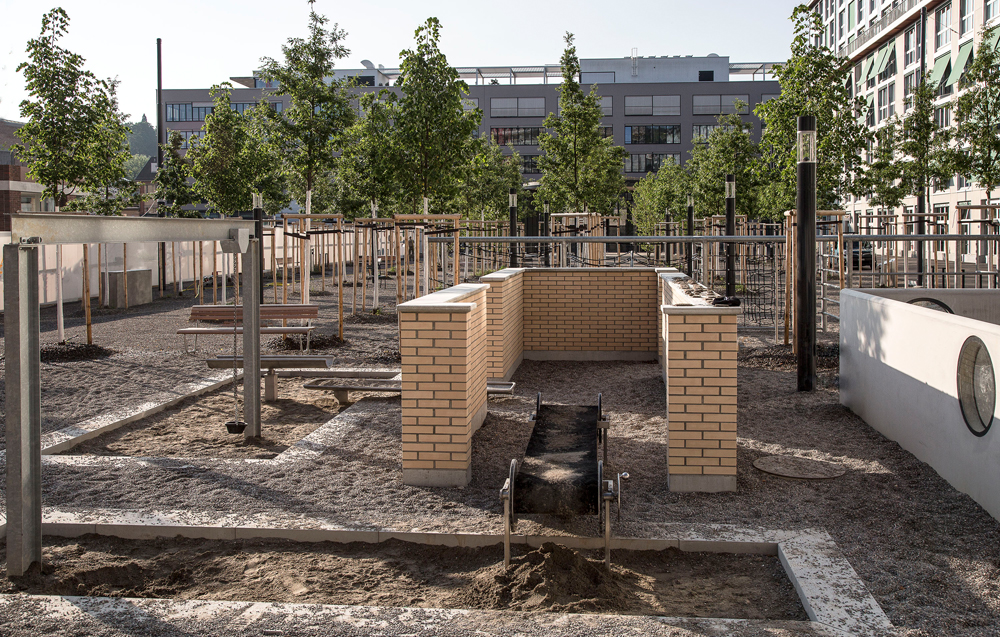 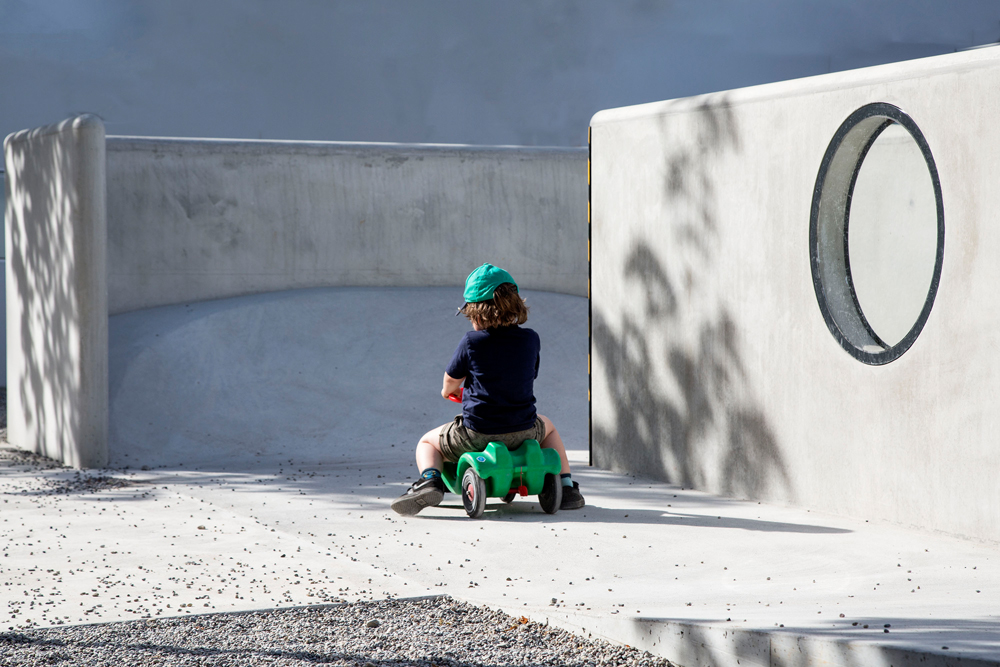 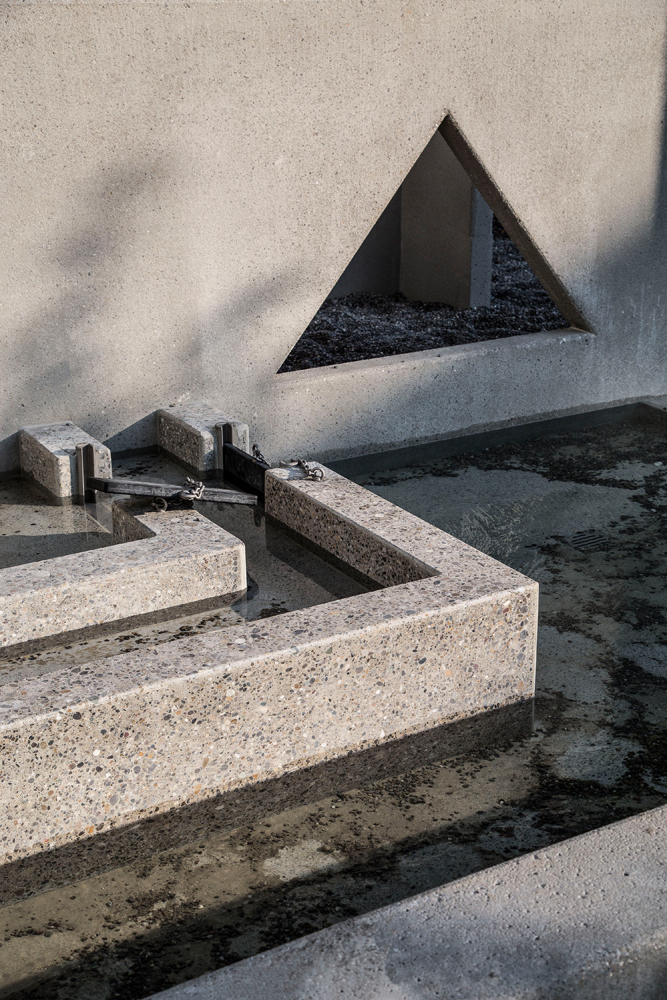 In addition to the play factory, the covered outdoor area on Dialogplatz refers to the industrial background of the site, both in its form and in its materiality. The pavilion offers space for various events such as yoga or dance classes, aperitifs or concerts. The covered area can be screened off from the square or opened up by sliding partition walls - depending on the use. 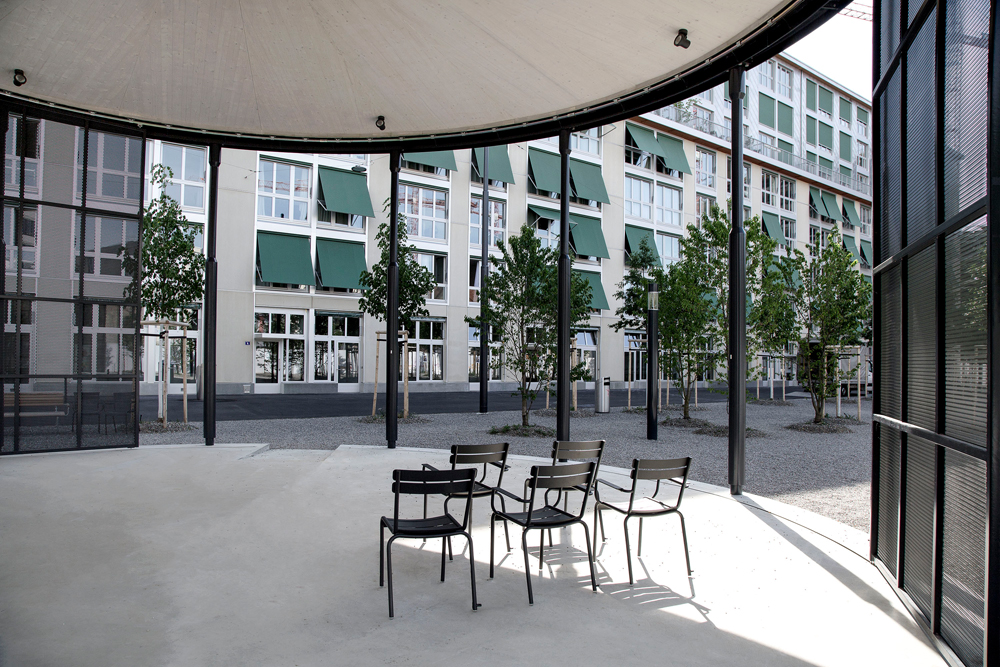 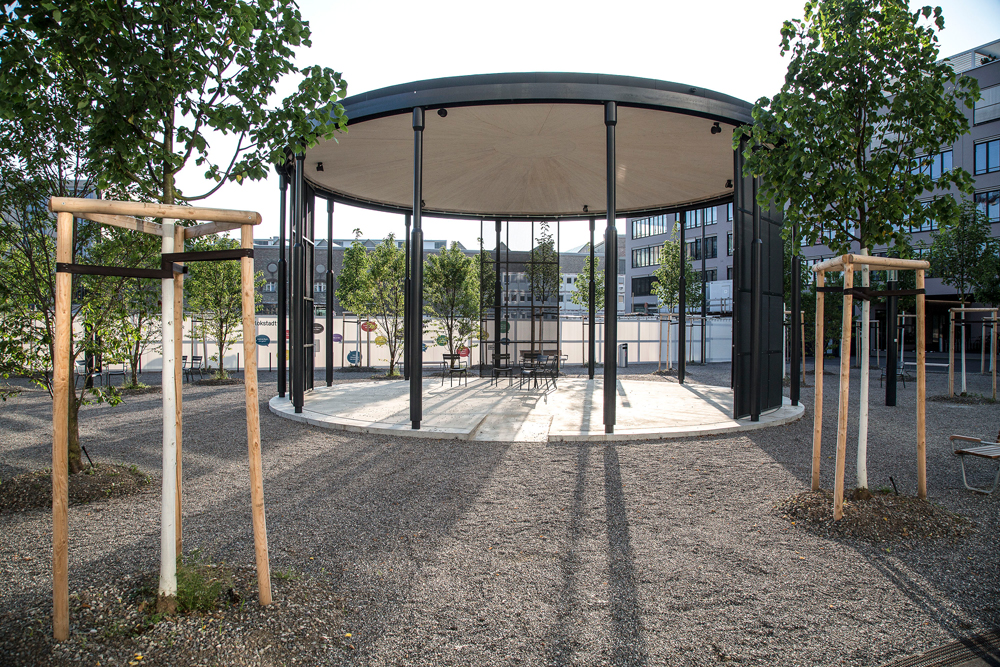 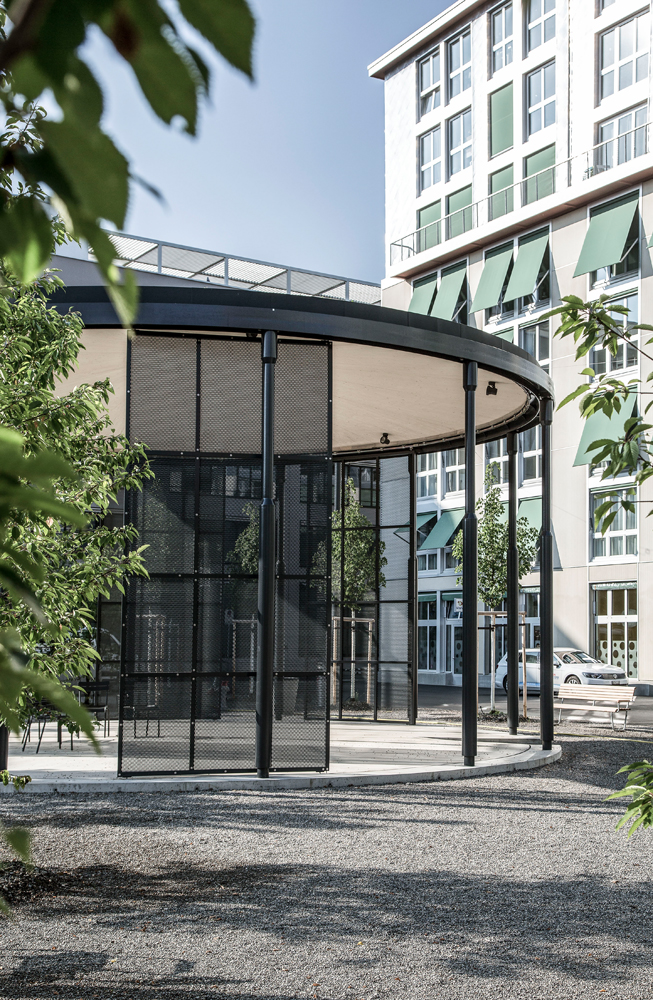 The surrounding public-oriented use of the building sites, the play factory and the covered outdoor area make the Dialogplatz a new anchor point in the city's open space system. At the same time, the various other typologies, such as entrance plazas and city gardens, also offer space for individual and neighbourly use on the doorstep. 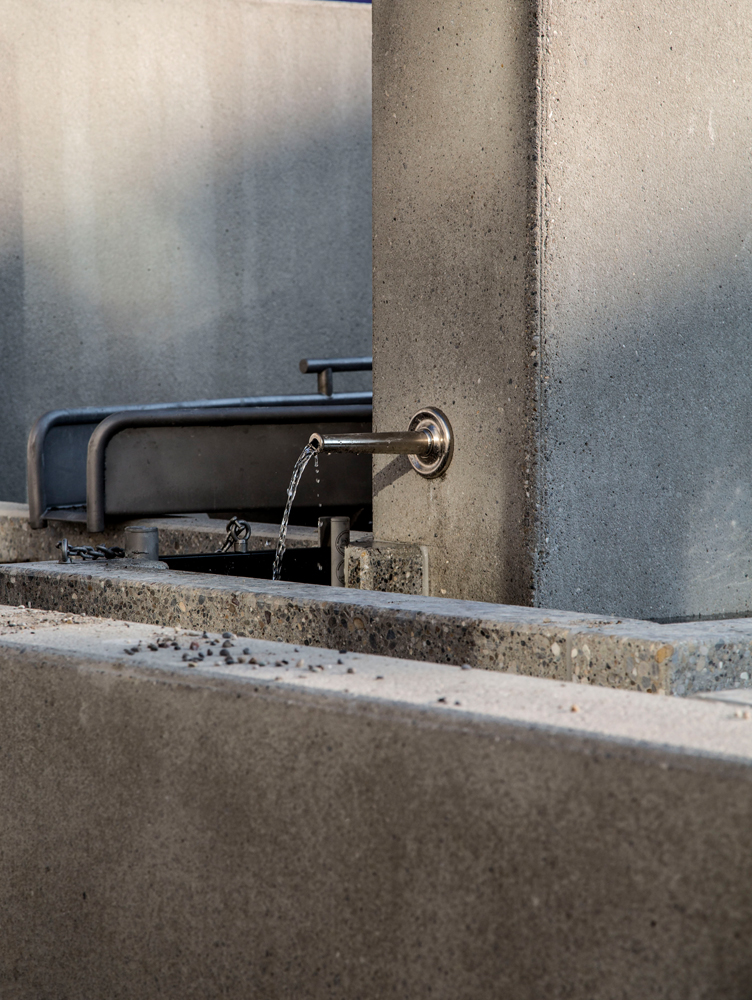 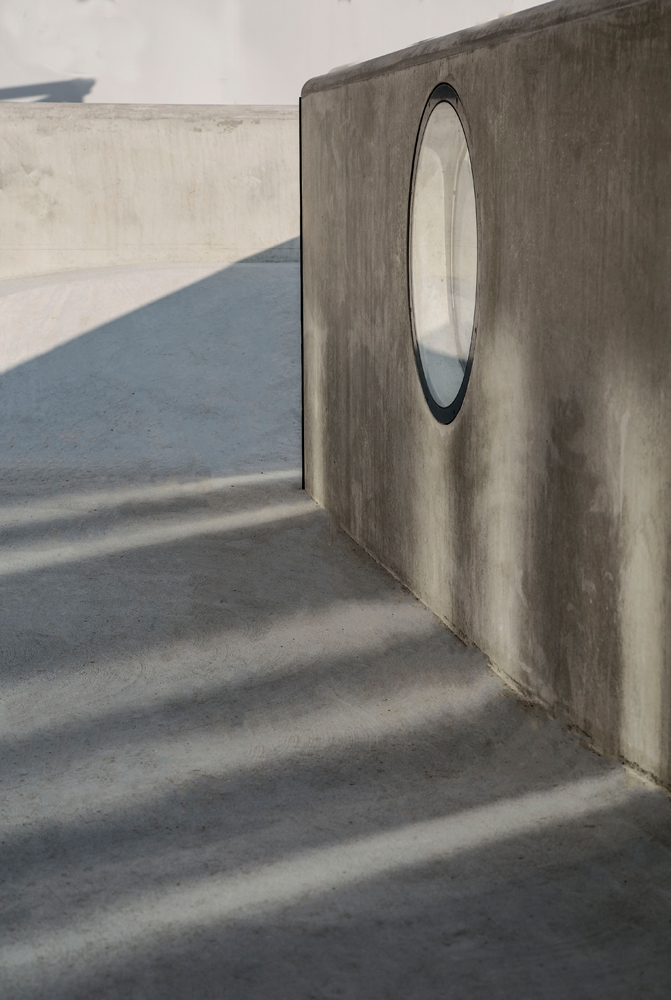 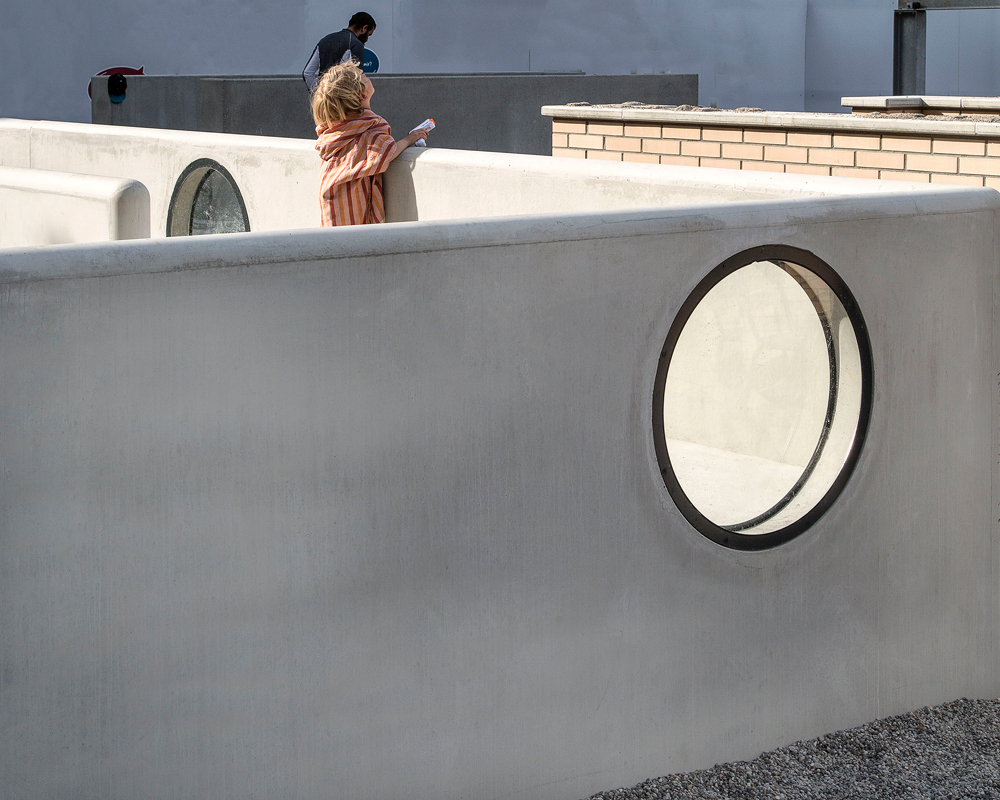 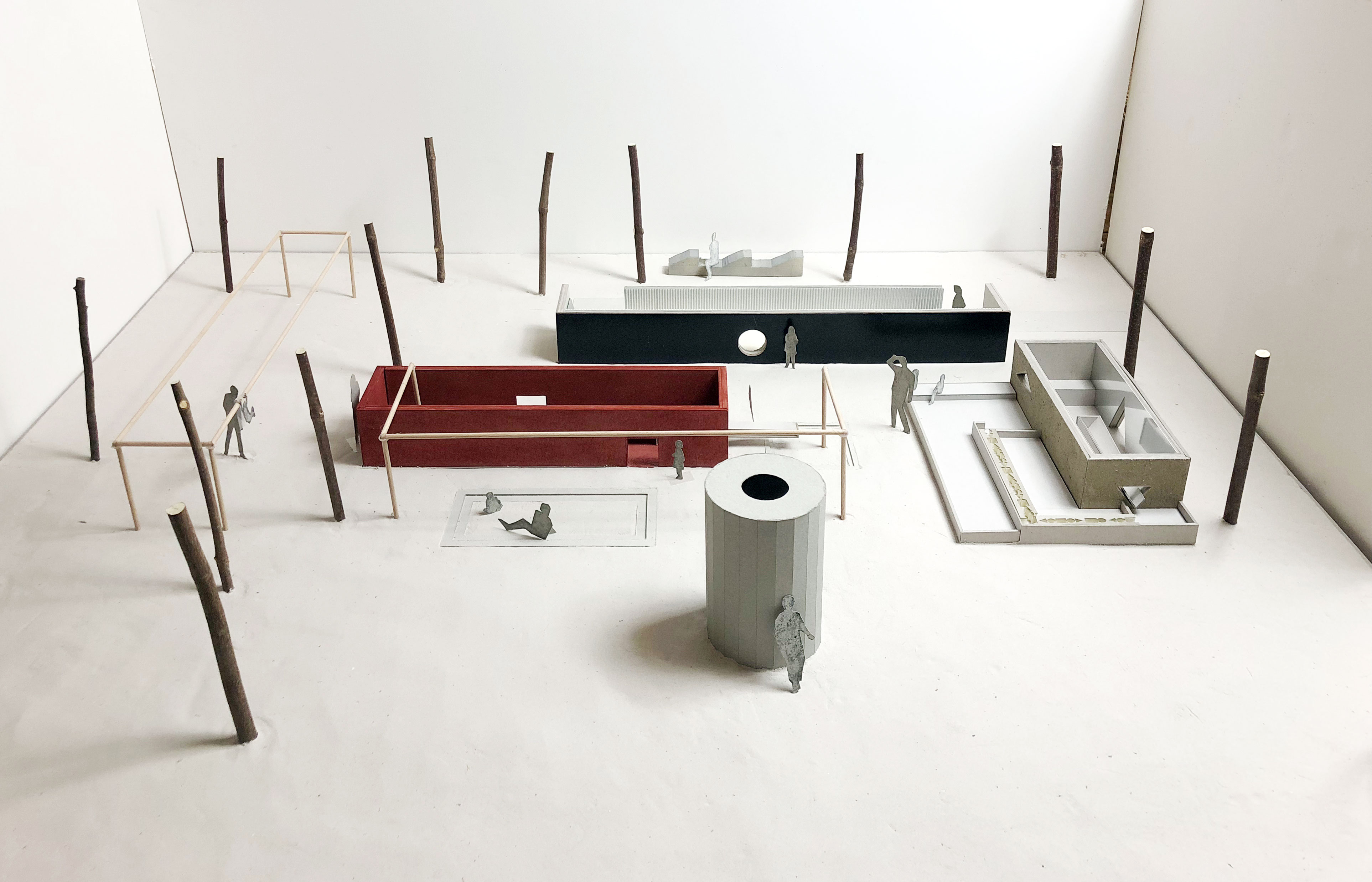 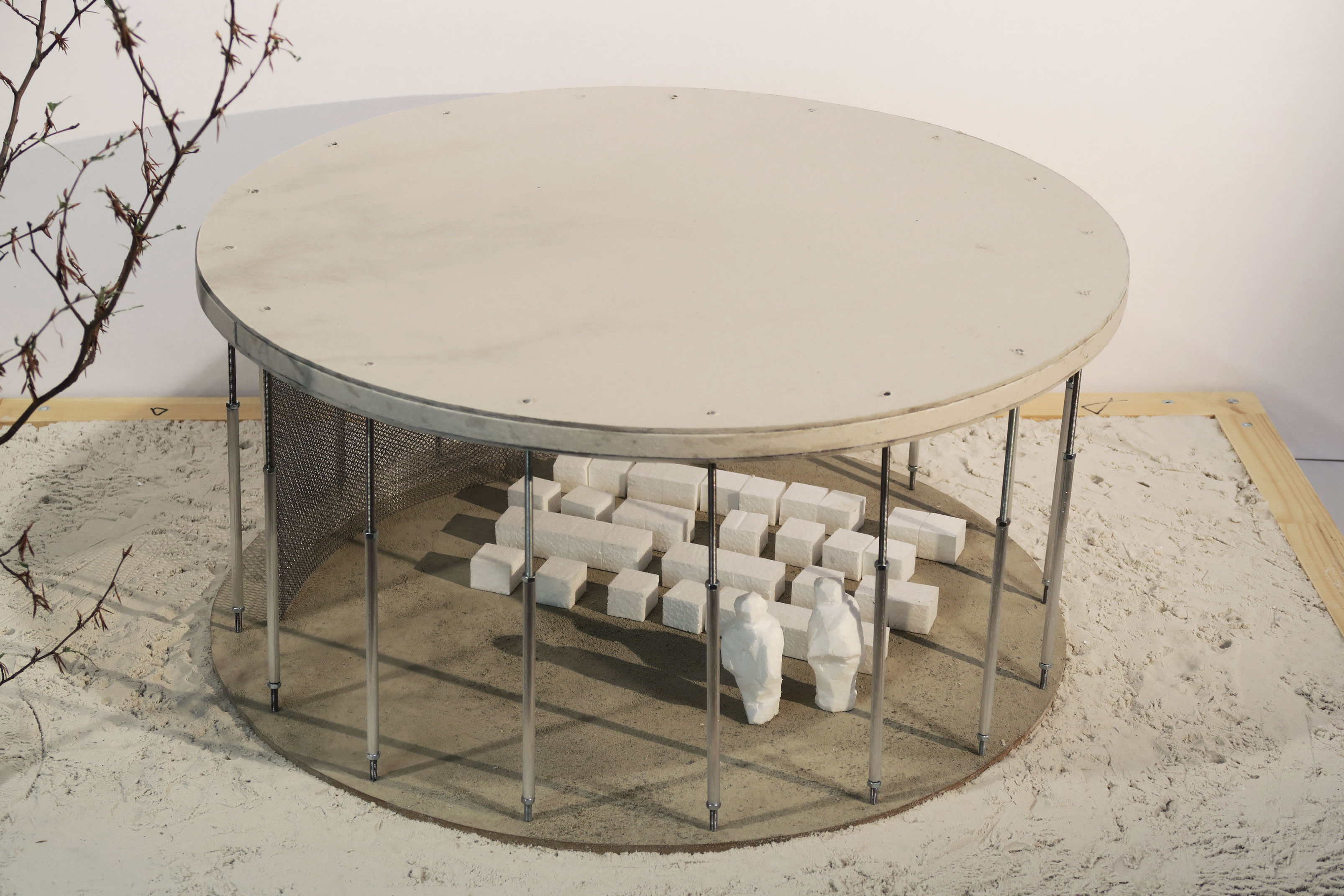 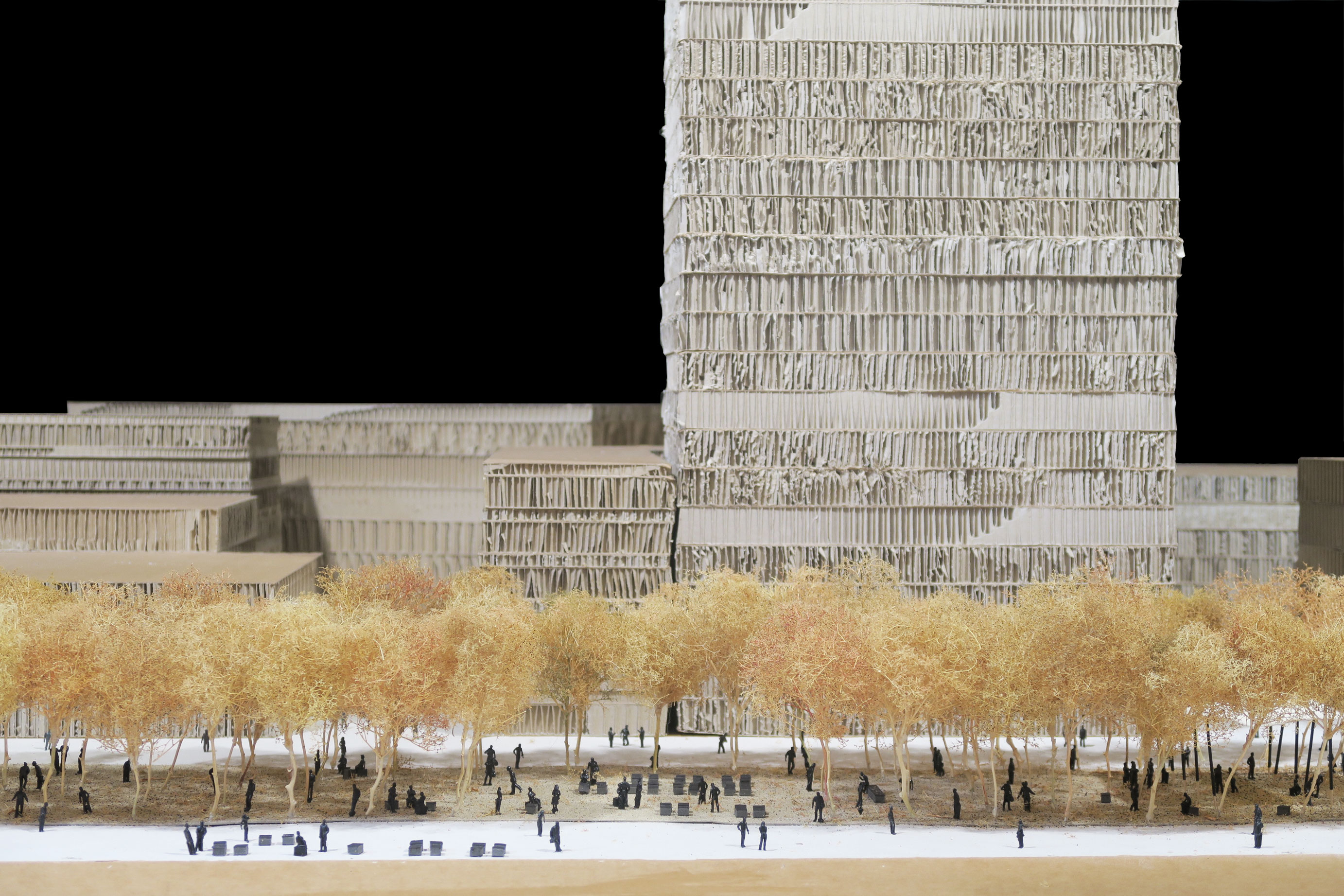