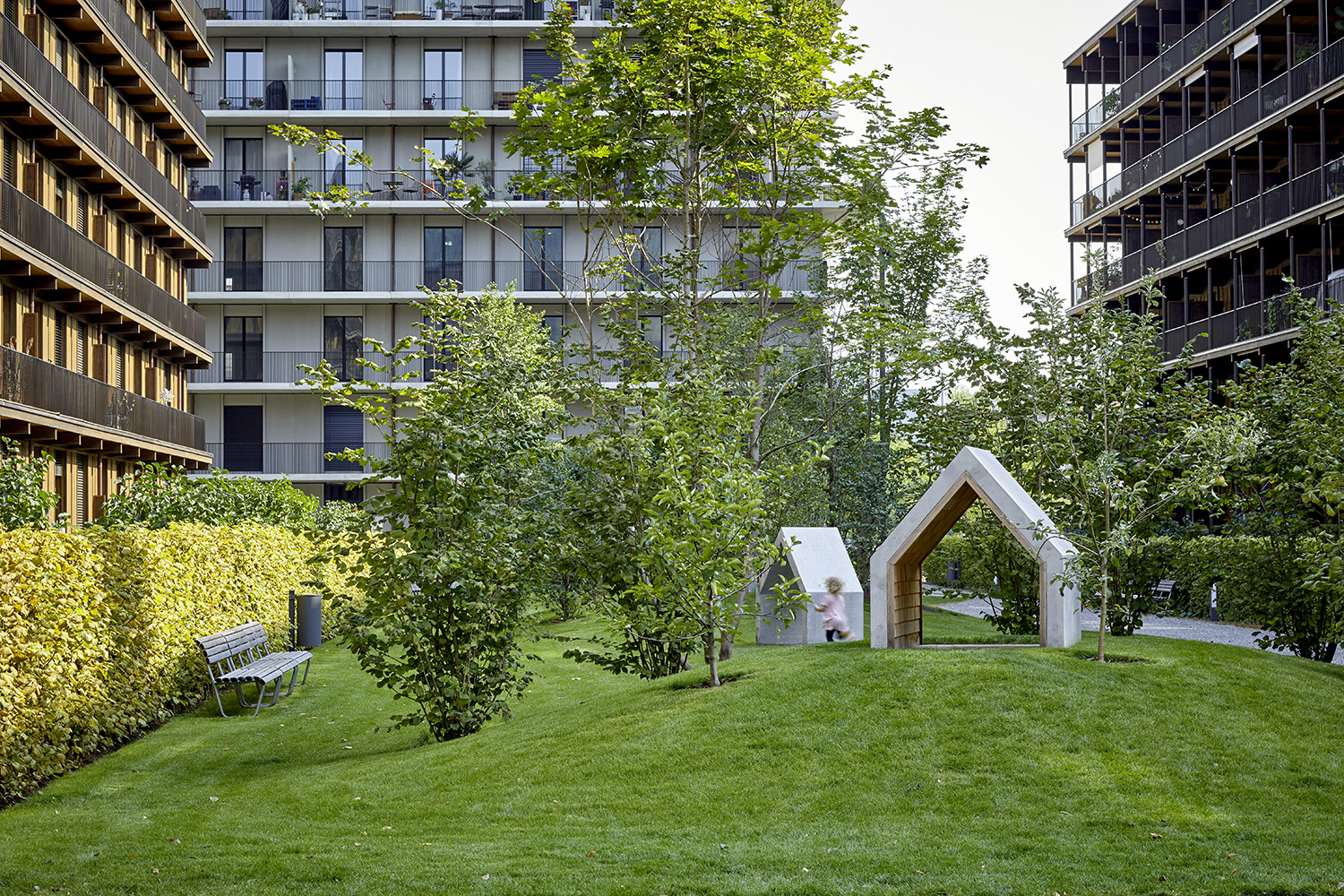 A new residential and commercial quarter was created on the site of the Zurich bonded warehouse, a former extraterritorial area of Switzerland for the tax-free storage of goods such as cars, coffee, and carpets. The opening of the complex enabled the construction of public squares, courtyards, and promenades at the transition between the densely built city, the “green neighborhoods”, and the wooded slopes of Uetliberg. The formerly closed site has thus become a vital link in the body of the city. The concept behind the outdoor spaces features two overarching themes: up to three meter-tall hedges clearly structure the open space into private and public areas and serve as walls and roofs to accommodate covered parking spots for several hundred bicycles and benches. As a secondary feature, two of the garden courtyards have special playgrounds that are exclusively reserved for children.

For a family, the delivery of a new household appliance is often a dual cause for joy. Some are thrilled with what is in the package, others are excited about what can be done with the box. For children, it is obvious—even without instructions— that this box is more than just packaging. The cardboard box is commandeered, doors and windows are painted on or cut out, and the children then move in: it is the model of a house. The key here is the shift in scale and responsibility: the size of the house corresponds to the size of the children. Doors and windows can be reached unassisted, and the children are free to arrange things as they want. It is a space for fantasy, one that is inaccessible to adults.

The Freilager largely dispenses with the standard array of classic play elements such as slides, swings, and seesaws, opting instead to transpose the idea of the cardboard box described above, which is duplicated many times over to create an actual little city and village. The children’s selfcrafted, isolated model is turned into an abstract, precise concrete structure that is both part and prototype of the surrounding city. 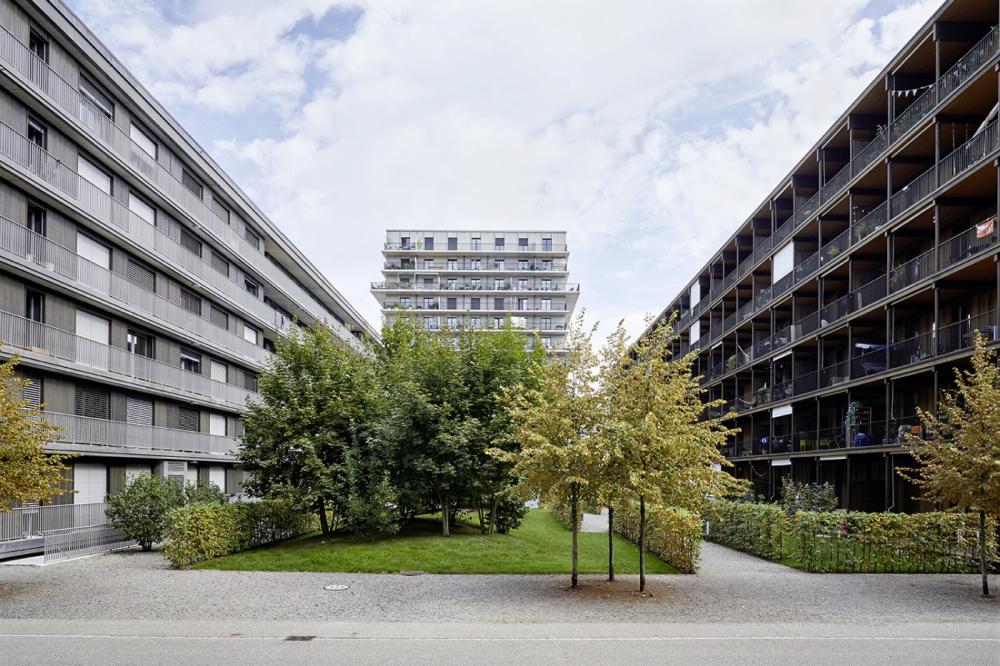 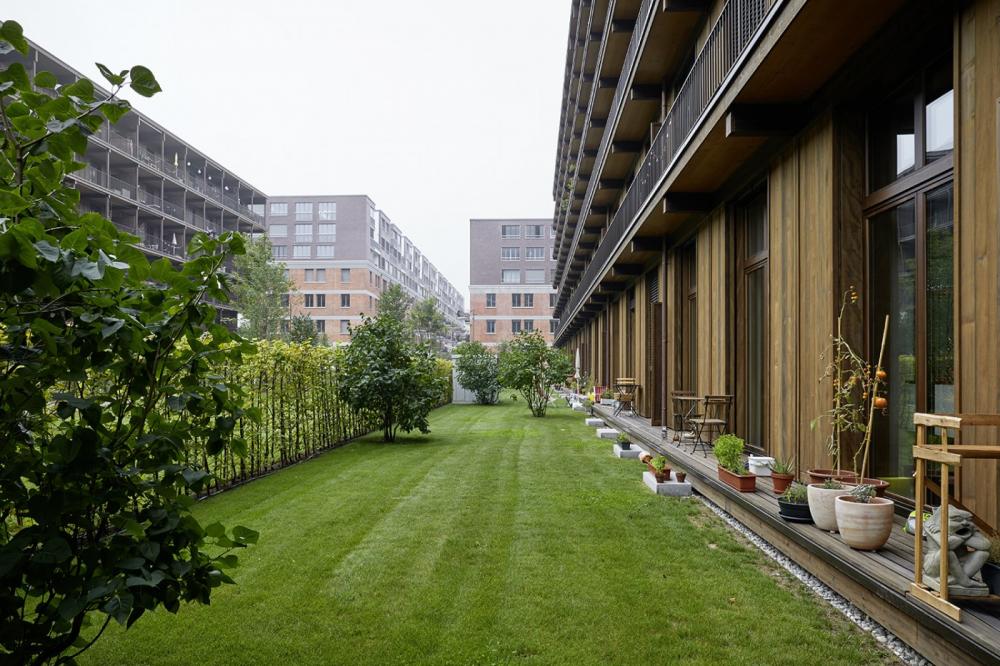 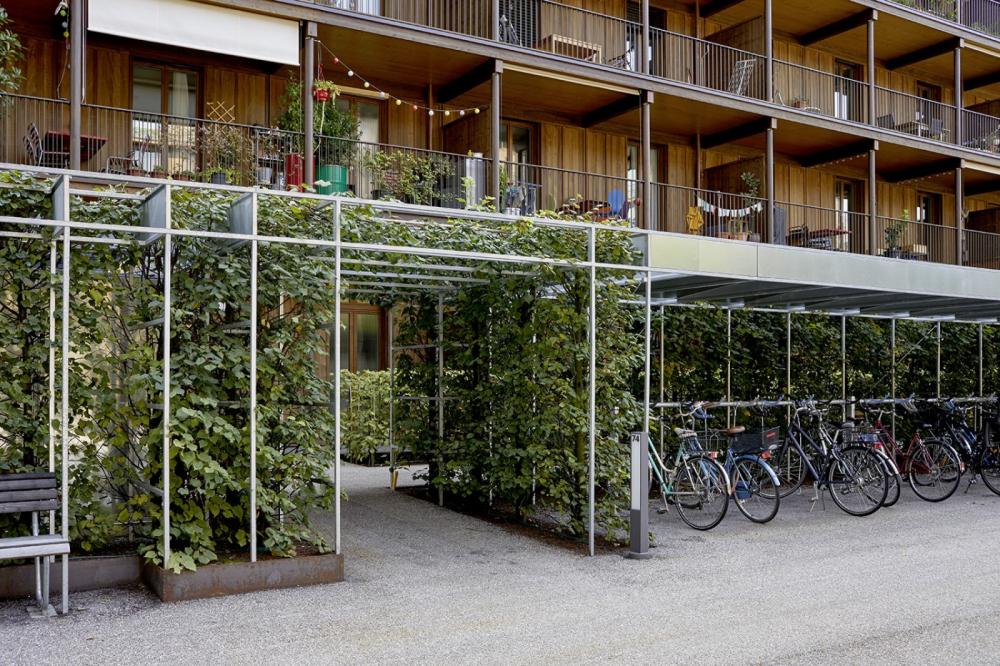 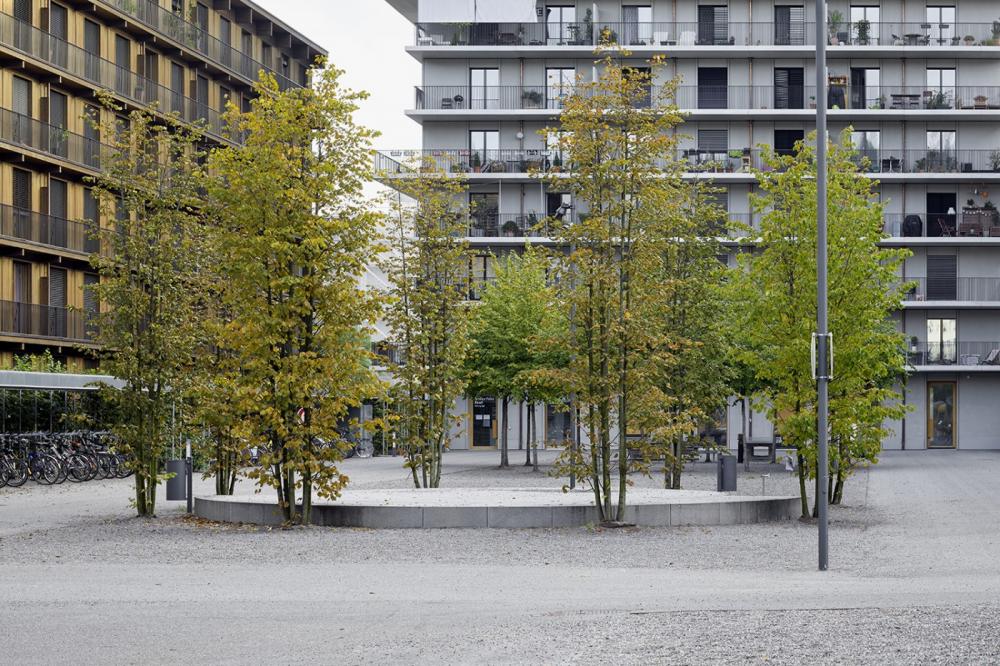 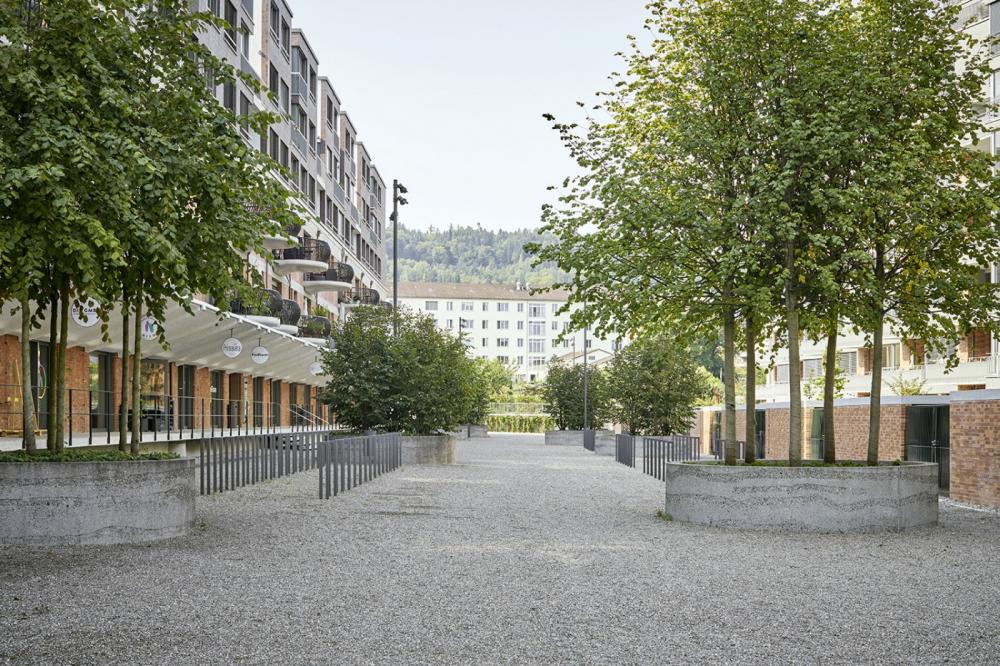 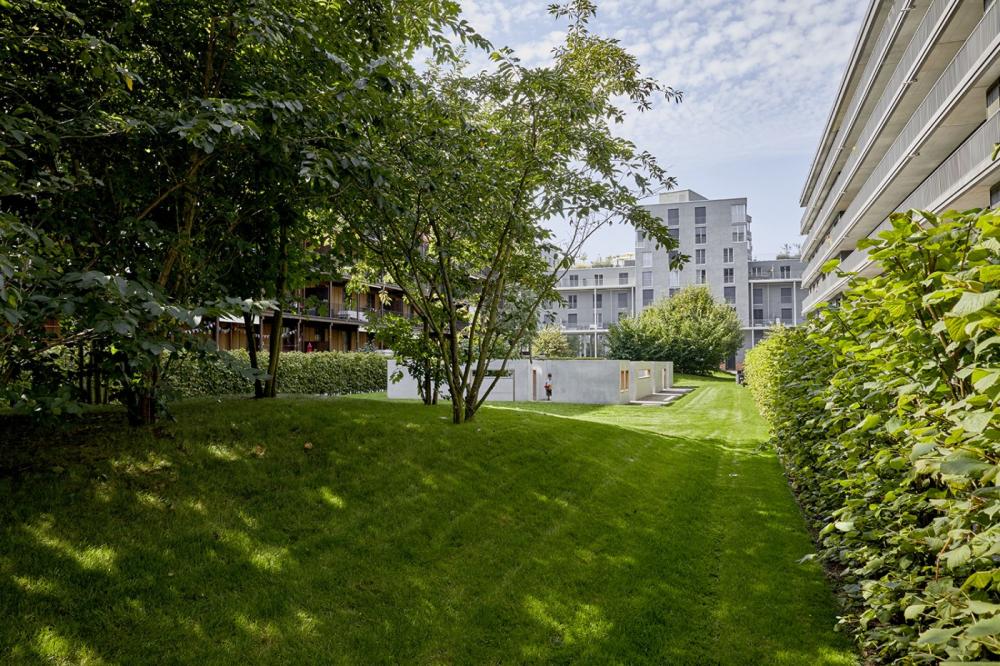 Embedded in the new district of high-rises and elongated structures, the children’s city lies on a single level. Here, the rules governing the surrounding neighborhood also apply, as do the dense clustering of the buildings, the variety of uses, and the articulation enabled by open spaces such as streets and squares—only the scale is different. The concrete buildings are prefabricated, with uniform basic dimensions and doors and windows in identical places. The variety resides only in their positioning in relation to each other. Wooden window and door frames turn the shell structures into simple houses. Residential buildings, school, shop, factory, construction site, and laundry are differentiated by their flooring, walls, and furnishing— for example, a bench with a table or a counter. The grid of the city forms a primary network of streets that adults can also walk through. The playhouses are connected to one another by doors and windows, a secondary system only accessible to children.

Just as the characteristic hedges separate private gardens from common areas, the territories of the buildings in the children’s village are marked out by fences, hedges, or even just groups of shrubs. Although the houses appear uniform from the outside, they are not identical: the design of the interior walls with mirrors, plasterwork, or wooden paneling creates different settings. What, for adults, is just play equipment—the model of a building—is real for children and an integral part of their everyday life. Where does the prototype end and the model begin? 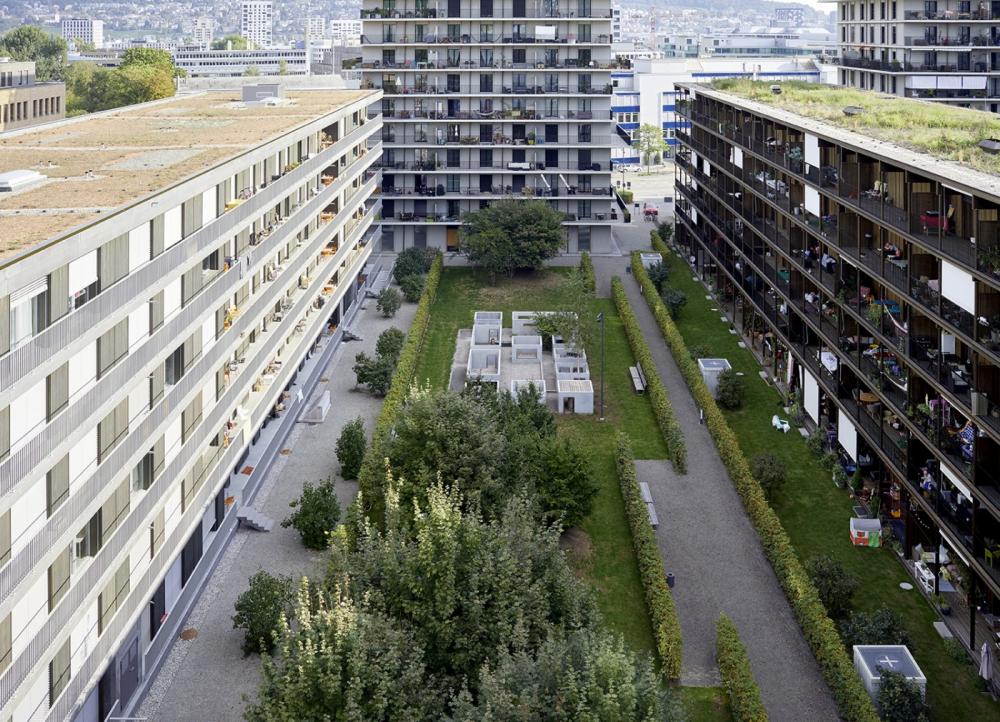 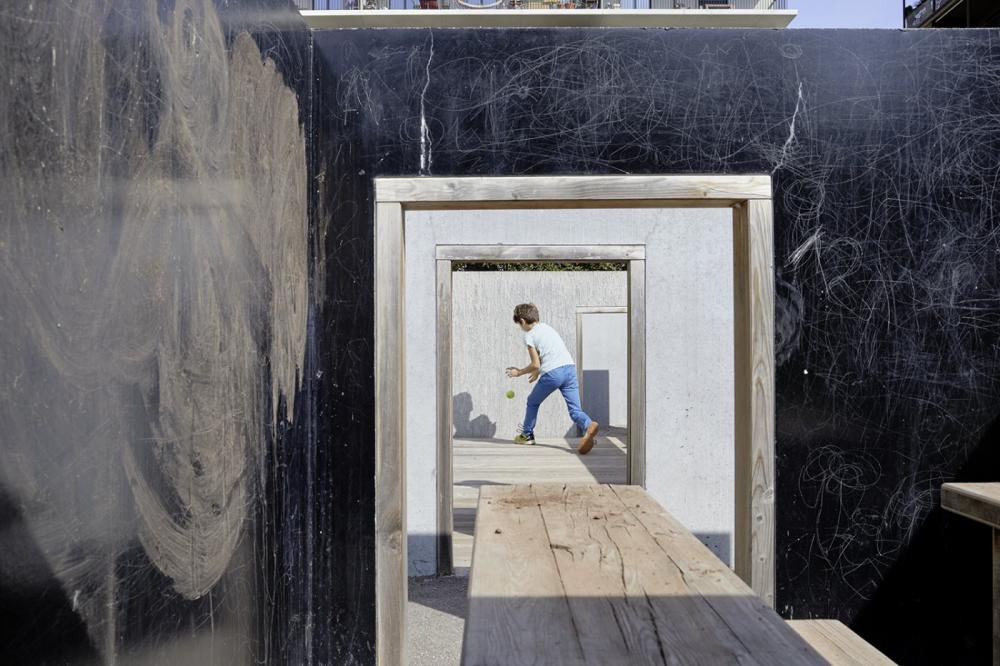 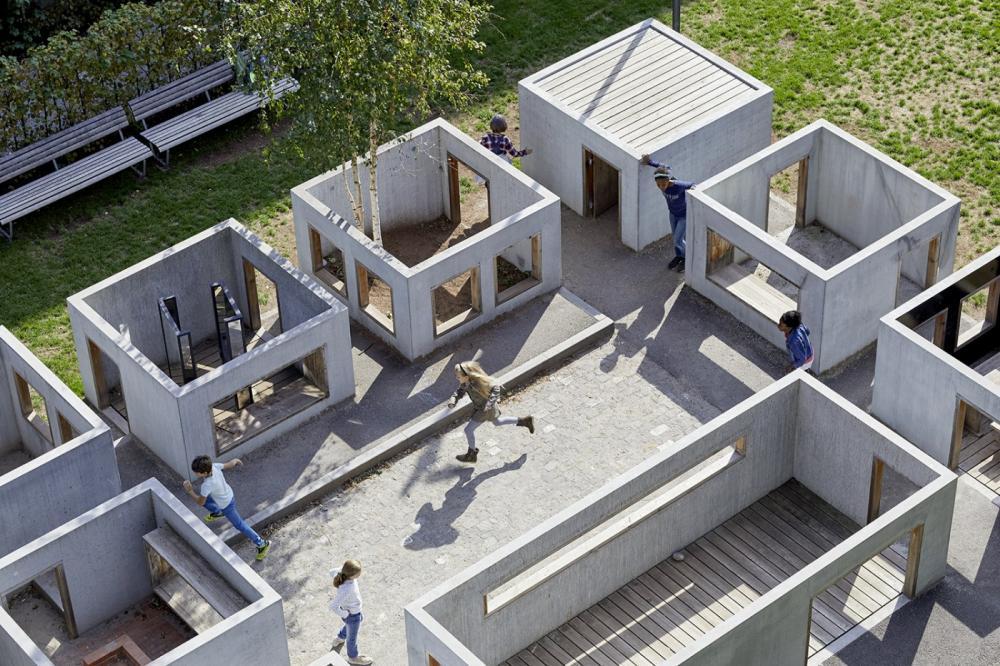 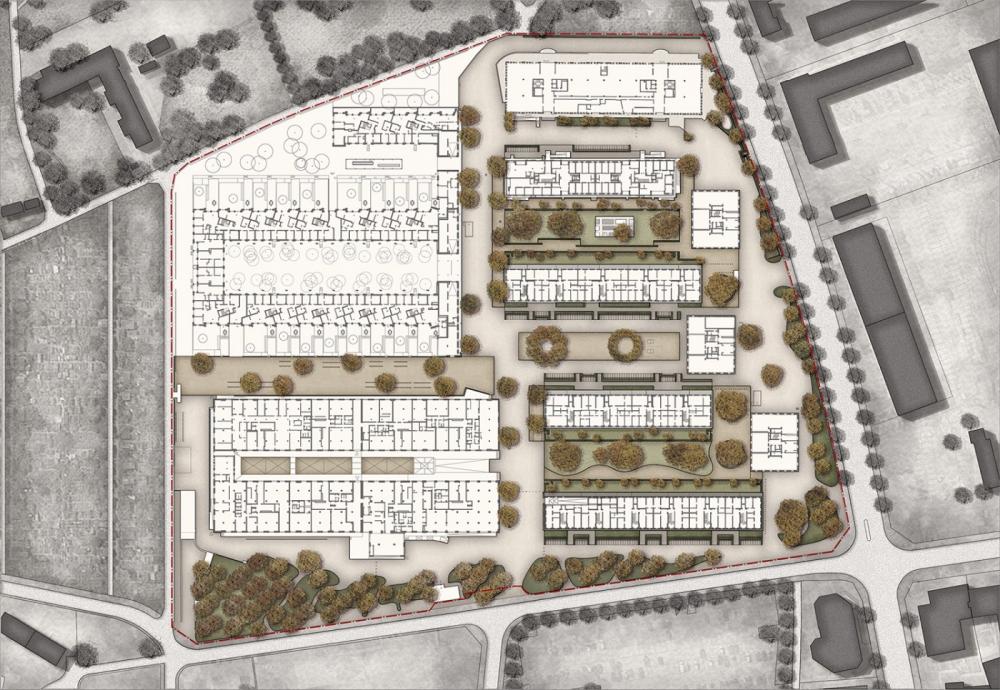