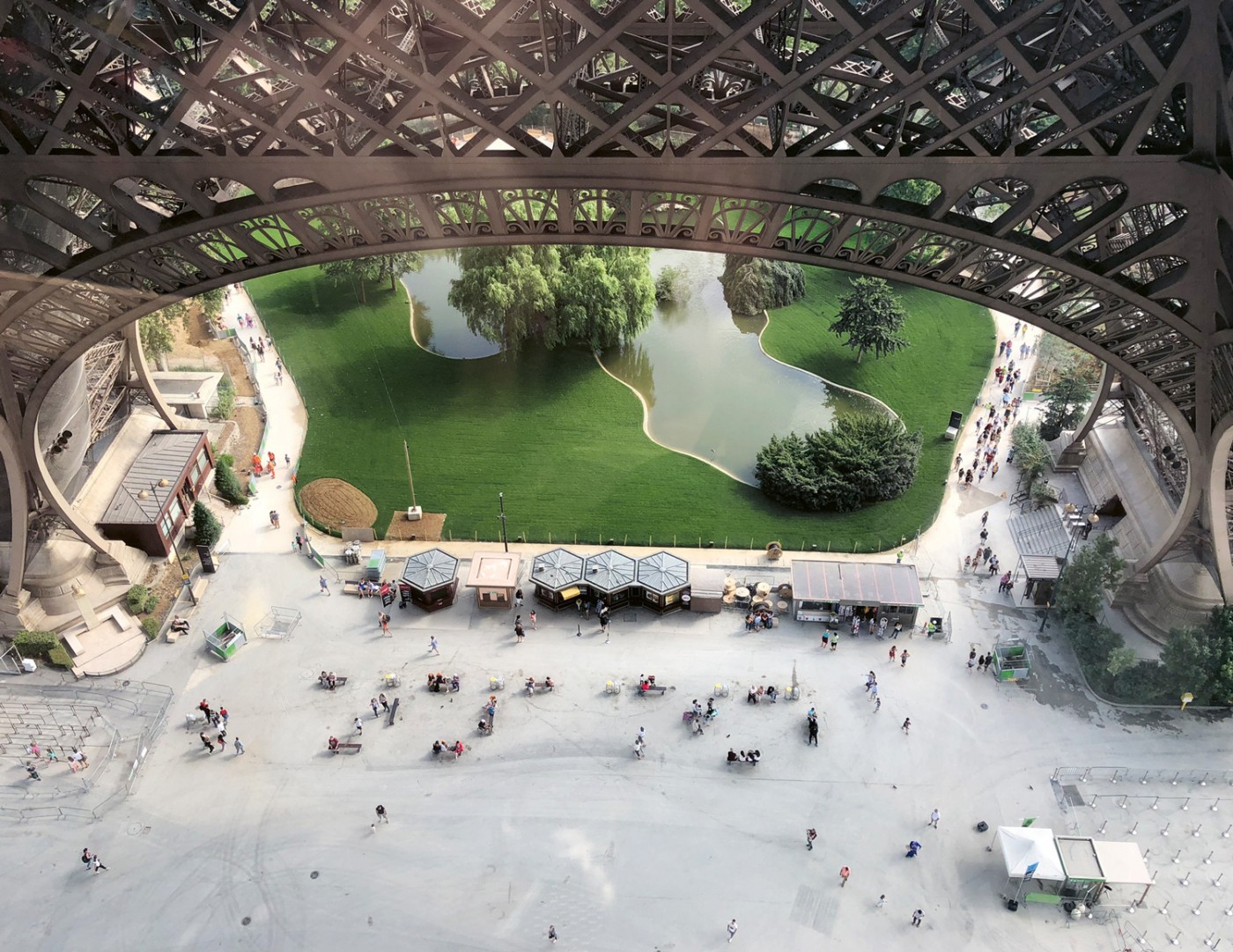 The Gardens of the Eiffel Tower, Paris

Monster in the Garden

With close to seven million visitors a year, the Eiffel Tower is one of the most visited attractions in the world. The recent terror attacks in Paris called for a rethink of the site’s security and the fencing off of its surroundings. This new security paradigm became an opportunity to rediscover the gardens that once lay beneath the monument. Indeed, the gardens existed years before the Eiffel Tower was built, as part of the vast ensemble of the Trocadéro–Champs de Mars, stretching from the Colline de Chaillot to the military school on the other side of the Seine. Over time, they changed in layout and composition, so much so that they began to lose their legibility and significance and were gradually forgotten. This journey back into the history of the site was also an opportunity to reflect on the possibility of a historical garden today, as well as notions of preservation, adaptation, and reproduction in landscape architecture.

From Picturesque Décor to Mass Tourism

Since their inception, the grounds of the Eiffel Tower have undergone several transformations. Used successively as a maraîchage (a cultivation ground) and a military exercise ground, the site was turned into a garden in 1878 to accompany that year’s Universal Exhibition. This original garden acted as the outline for a lasting composition of three main elements: a large clearing with paths for the promenade, two thoroughfares at the edges of the park, and two lateral basins at the lowest points, oriented and articulated to create changing landscape atmospheres. Two picturesque elements completed this décor: the grotto and the belvedere, both animated with waterfalls. Throughout the garden’s successive transformations, these elements would always provide a sense of continuity.

During the second half of the nineteenth century, the garden evolved from decorative scenery for an exhibition to bourgeois garden, while the rest of the Champ de Mars was transformed into an urban park promenade. The most important change occurred in 1889, when the overall composition was disrupted by the construction of the Eiffel Tower inside the garden. The meeting of the 324 m tall monument with the open expanse of the Champ de Mars brought about the specific sequence known today as “the gardens of the Eiffel Tower,” characterized by their relationship in scale and typology to the tower’s pillars, rather than to the Trocadéro as a whole. The iron giant, recognized worldwide as the symbol of a city and of a country, rests its massive pillars in a miniature landscape.

From the beginning of the twentieth century, further transformations and the multiplication of built elements began to break up the gardens’ rhythm and symmetries. Fragmented and incremental planting gradually obstructed the historical sight axis, and over the years the composition of vegetation became less legible. By 2016, when the city of Paris called for new security measures for the site, the gardens appeared exhausted and trampled. They had become almost invisible to the ever-increasing numbers of visitors and to Parisians alike. 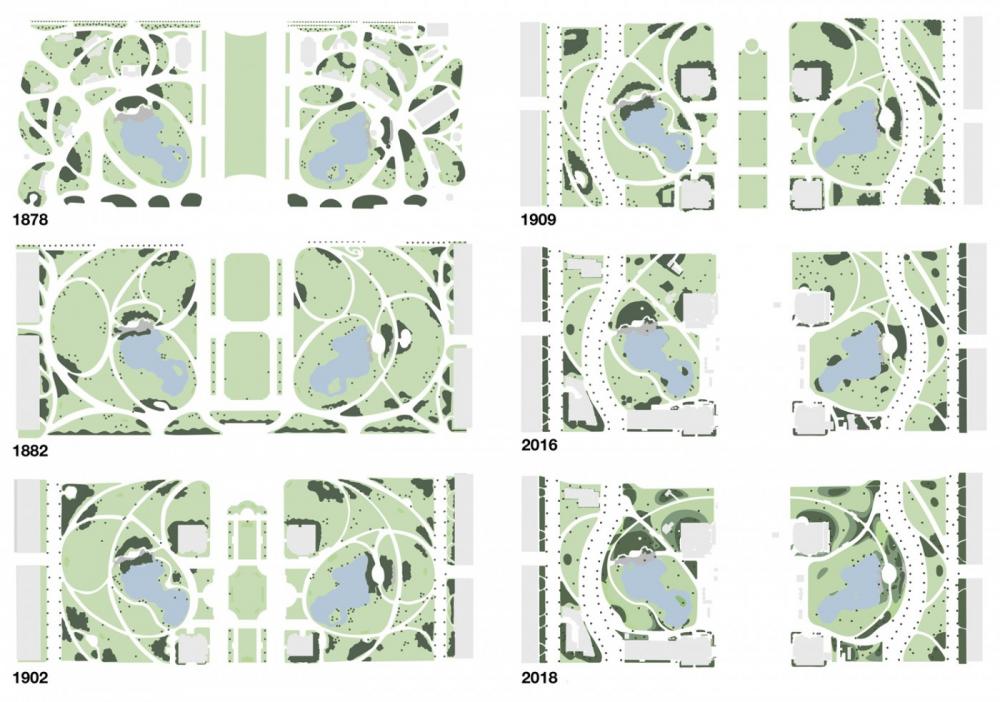 Between Preservation, Reproduction, and Adaptation

The need to fence off the site and shift its points of access for security reasons became an opportunity to reflect generally on the extended perimeter of the grounds, while rediscovering these forgotten gardens. Indeed, despite the many iterations on the original gardens and their subsequent loss of legibility, traces of their original composition by the greatest landscapers and engineers of their time were still visible. With the help of Alphand’s written legacy, some of these original features were restored, while new paths were created, allowing visitors to rediscover the architectural events dear to the landscape architects of the time: the grotto, the belvedere, the chimney, the fountain – the subtle play of the excavated rocaille, the planted masses and topography that seem to have been there forever. In a carefully designed choreography of interwoven scales, the visitor’s focus wanders from the details of this miniature landscape up to the giant iron monument and to its extended urban setting, perceptible through the surrounding transparent walls.

Blurring the boundaries between existing and new, the project does not aim to preserve a static historical object or to formally restore the site to its previous state. Instead, it emphasizes the very notion of continuity and change in the garden, adding a new layer of meaning to the history of the place. 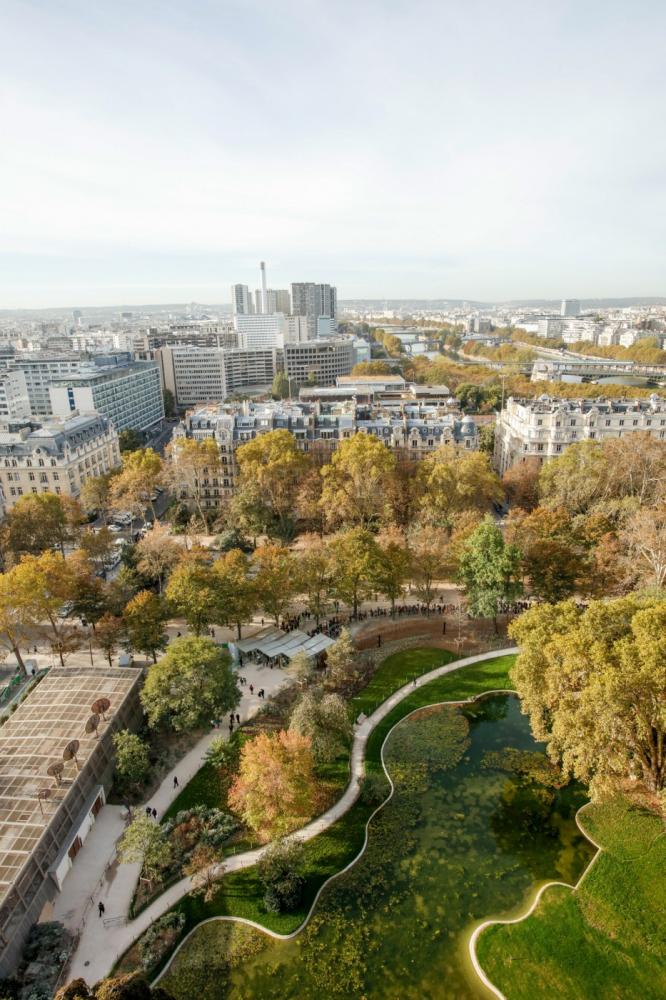 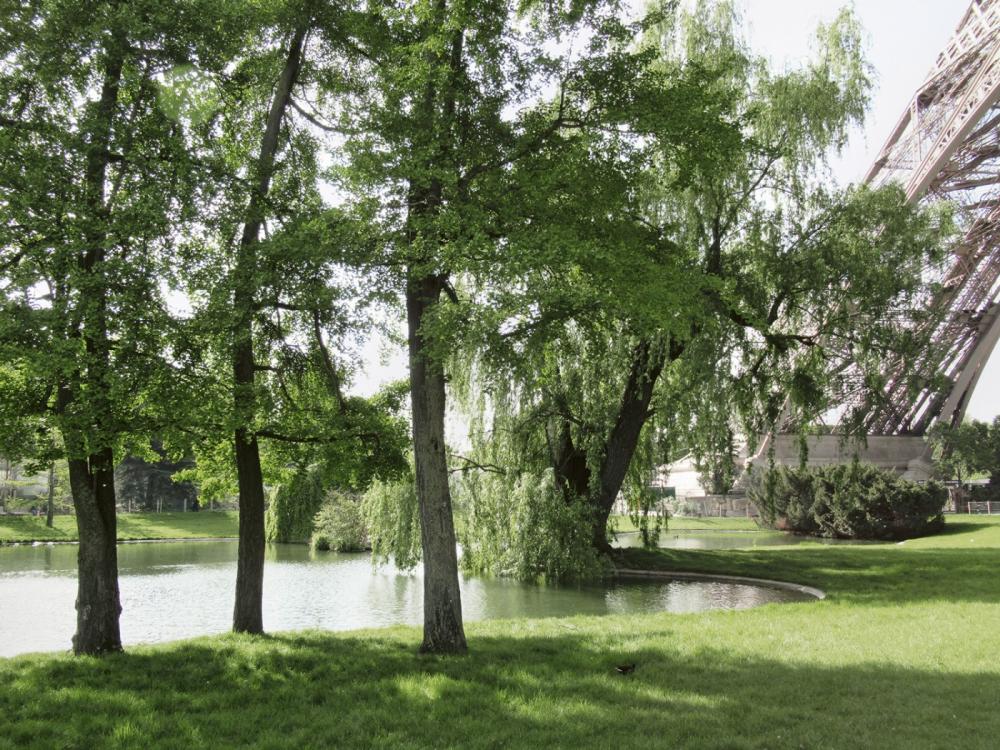 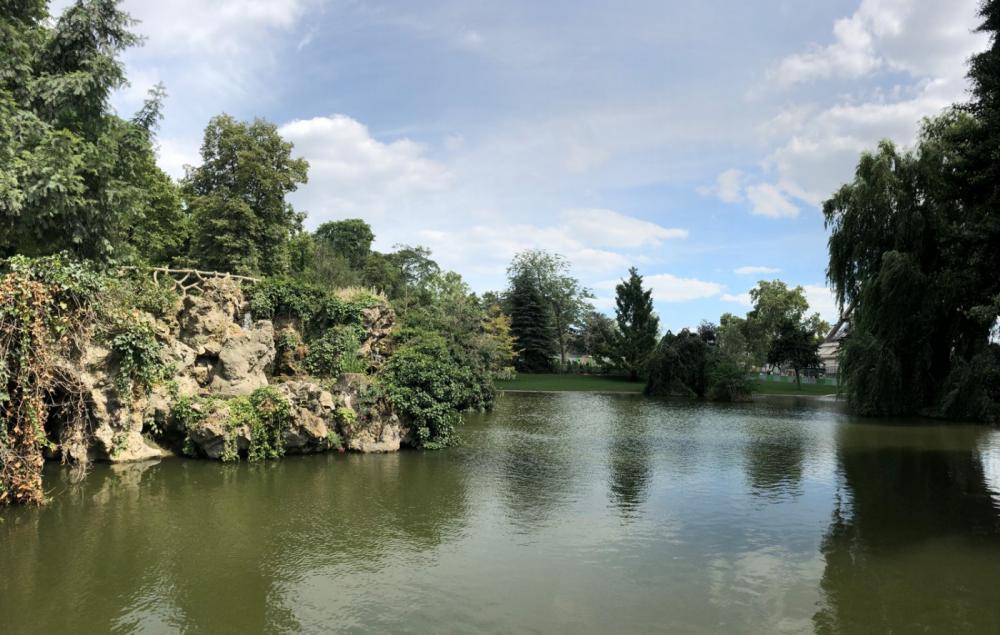 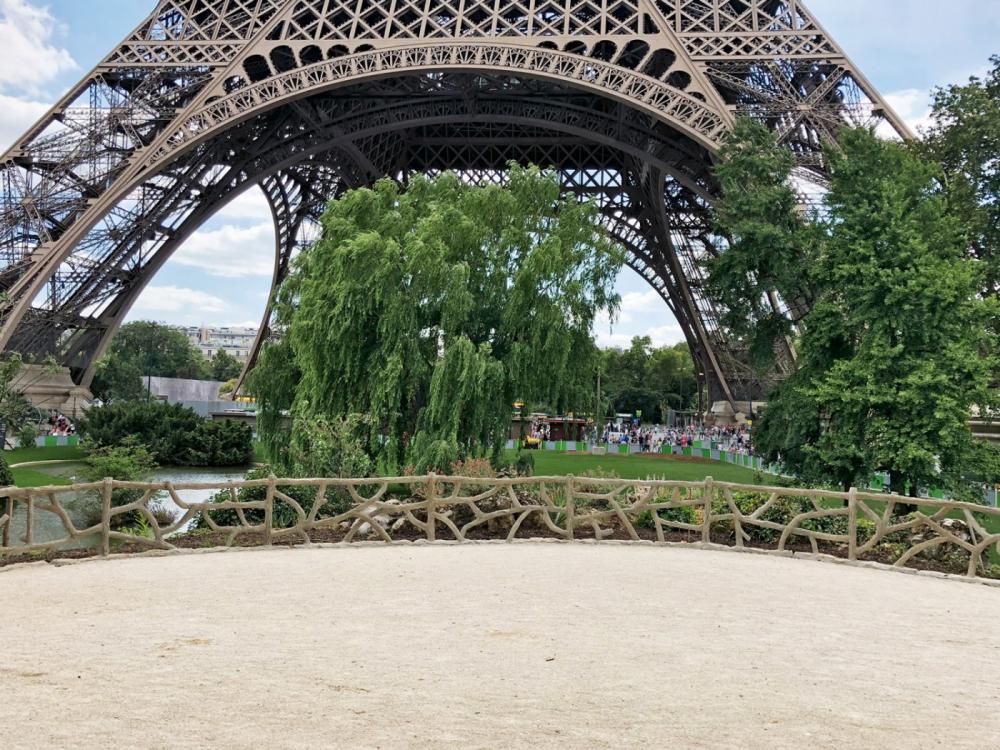 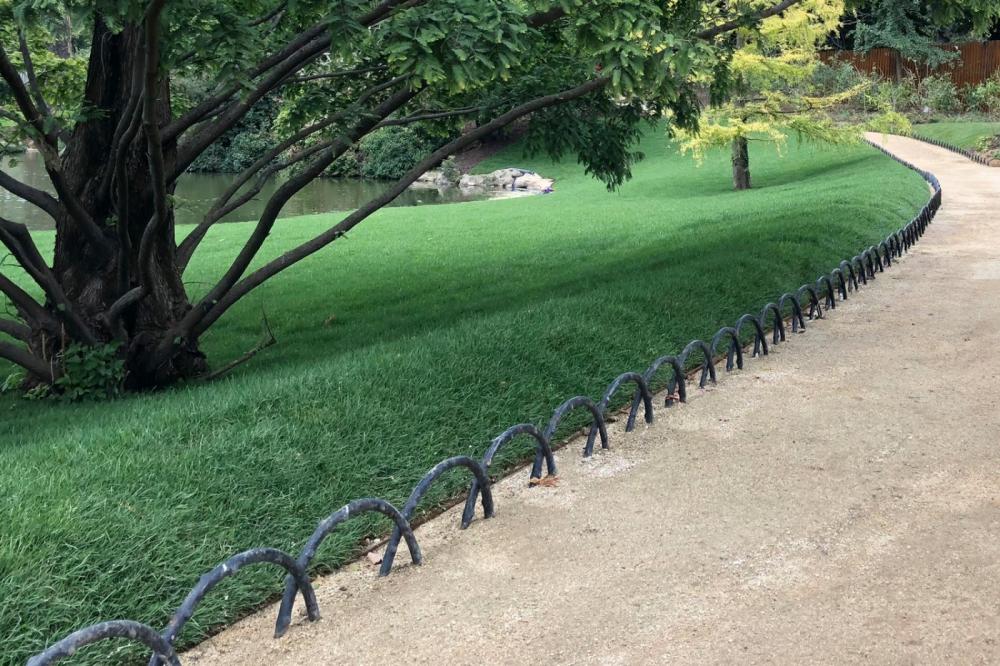 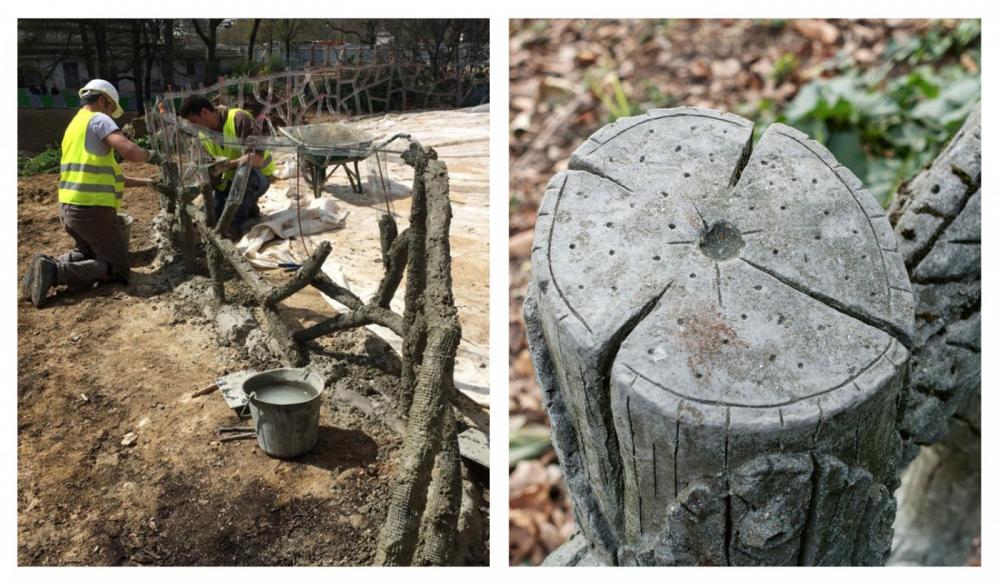 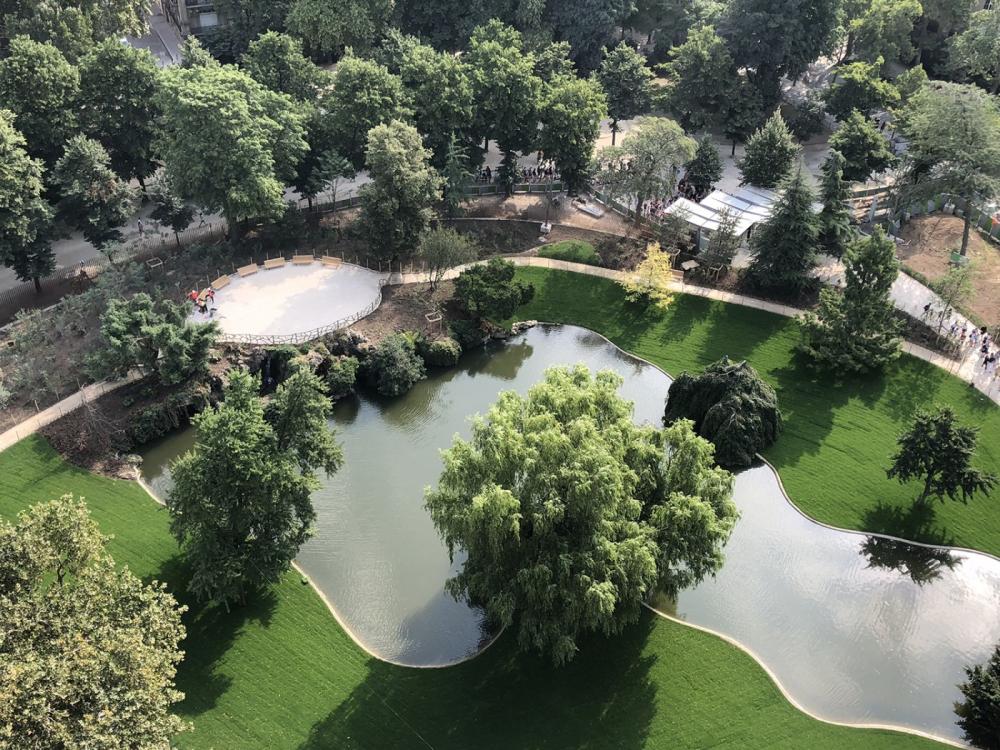