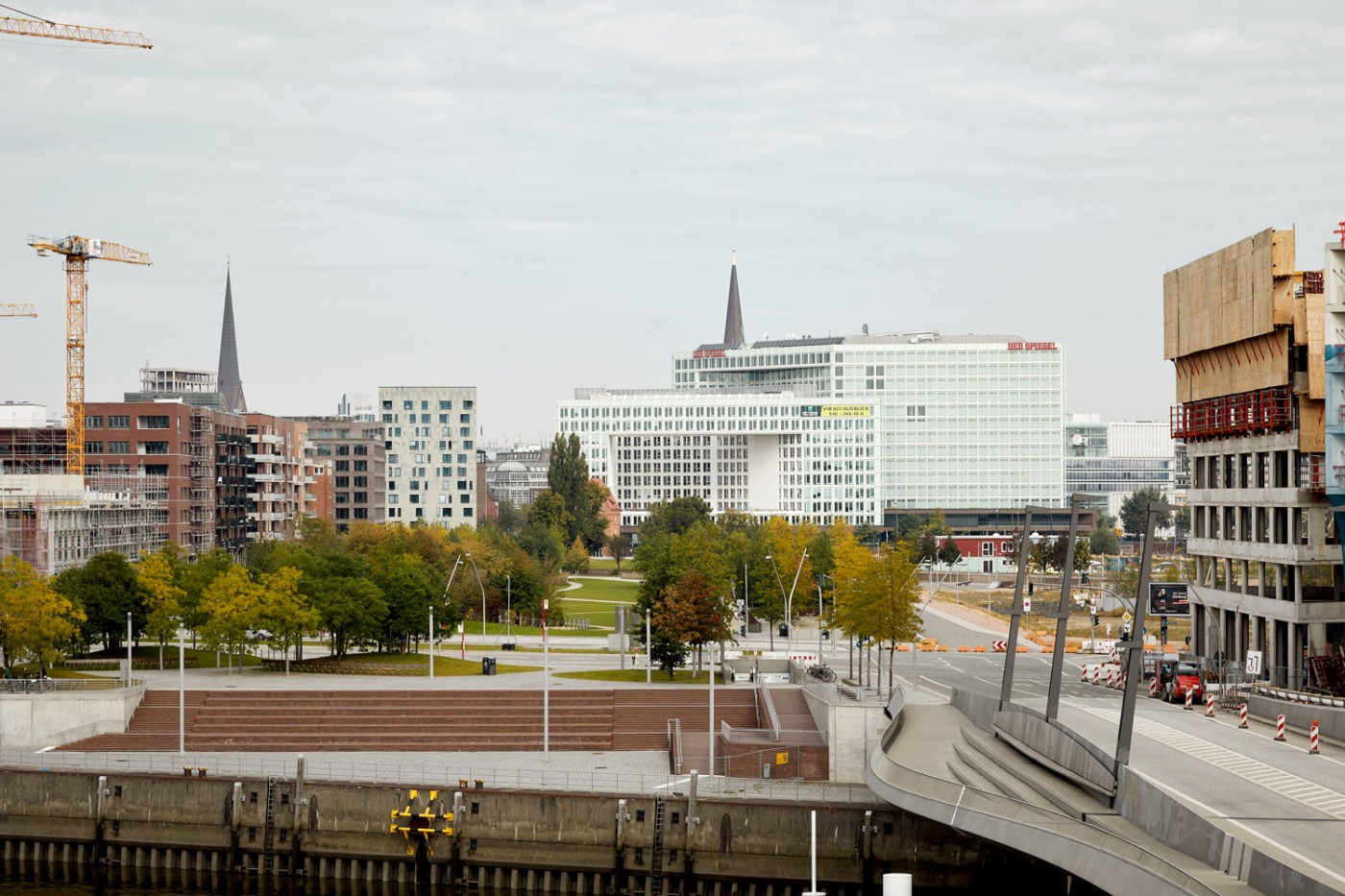 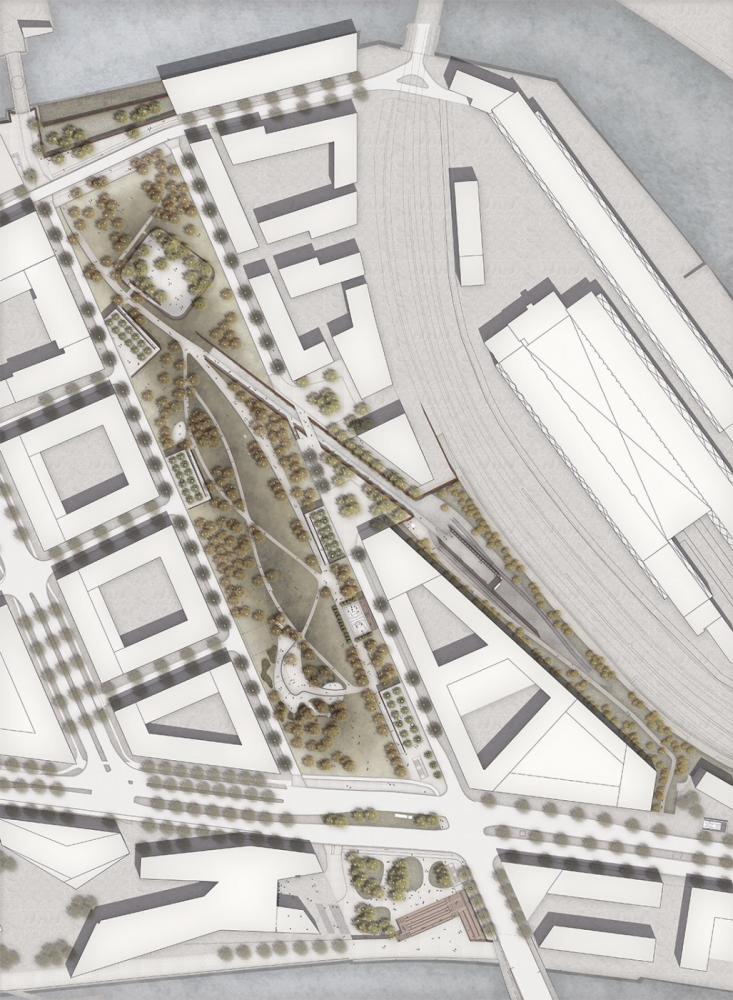 The city of Hamburg has a rich tradition and many parks created by the Volkspark movement. Today, numerous neighborhoods dating from the early twentieth century can still be clearly recognized, influenced by reformist ideas that advocated more light, air, movement, and education for the populace. According to Alfred Lichtwark, one of the promoters of the Gartenkunst reform movement in Hamburg, every inhabitant ought to have access to public green space within “pram-walking distance” of where they live. This tradition is part of Hamburg’s collective memory, which to this day still conditions not only the city’s architecture but also the expectations and usage habits of its population. The basic motif of many of the facilities is an open core framed by woodland or allotments: the so-called Volkswiese or “people’s meadow.” In its basic composition, Lohsepark continues the tradition of the Volkspark movement: like Hamburg’s Stadtpark or Altona’s Volkspark, the park was established “outside the city gates” with an eye to the anticipated process of urban development.

From Water to Water

If you stand in the middle of Lohsepark and turn around in a circle, you will get a sense of the spatial qualities of the area. At both ends, the longitudinal axis of the open space leads to a harbor basin, bringing light, air, and sunshine into the interior of the park. The traditional transition into a Volkspark marked by allotment gardens or a stand of trees - not realized due to a lack of space - has been replaced by a terraced shift in levels. As a complement to the line of sight leading from one body of water to another, this represents the second basic motif of the park: the separation into three tiers corresponding to three semantic levels. This stepping of the site not only acts as flood protection, it also acknowledges the history of the site and meets the spatial and programmatic requirements of the new quarter, while keeping the layering of the city legible. 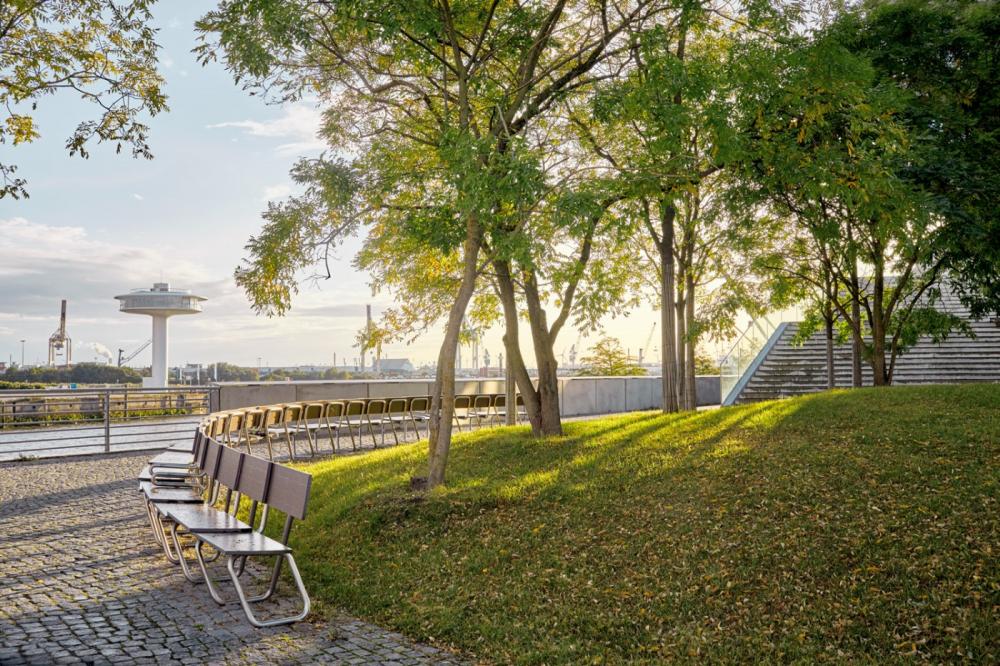 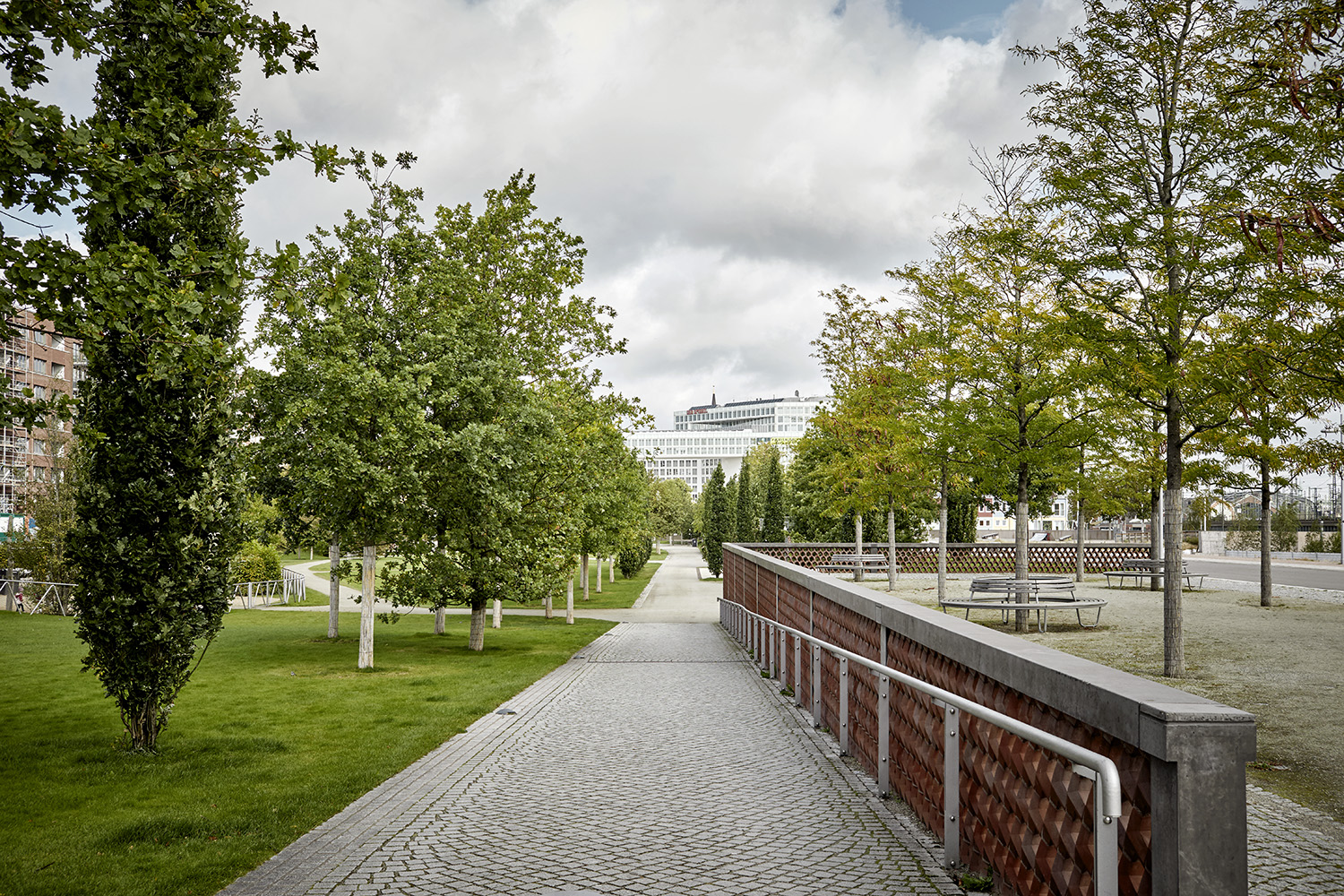 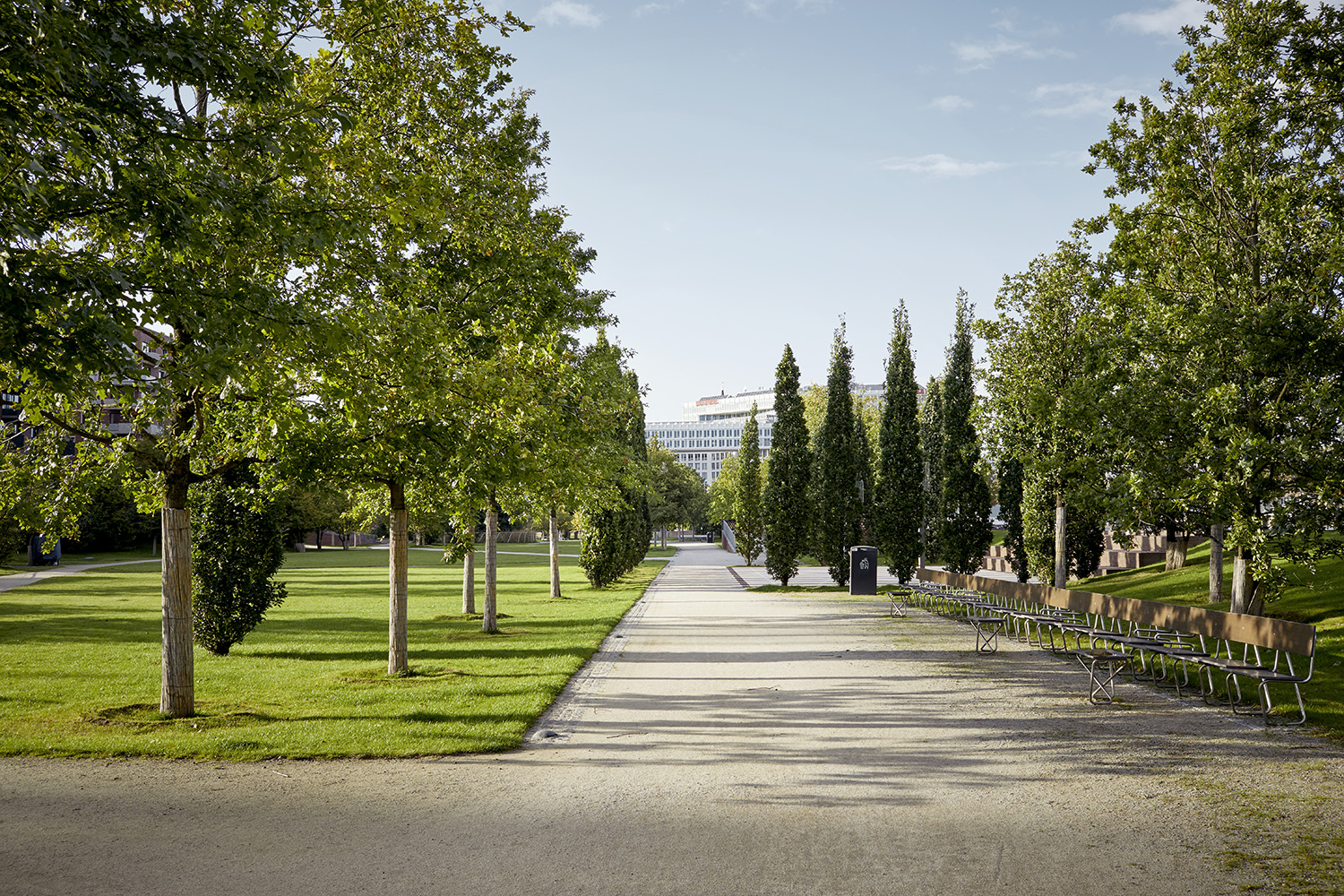 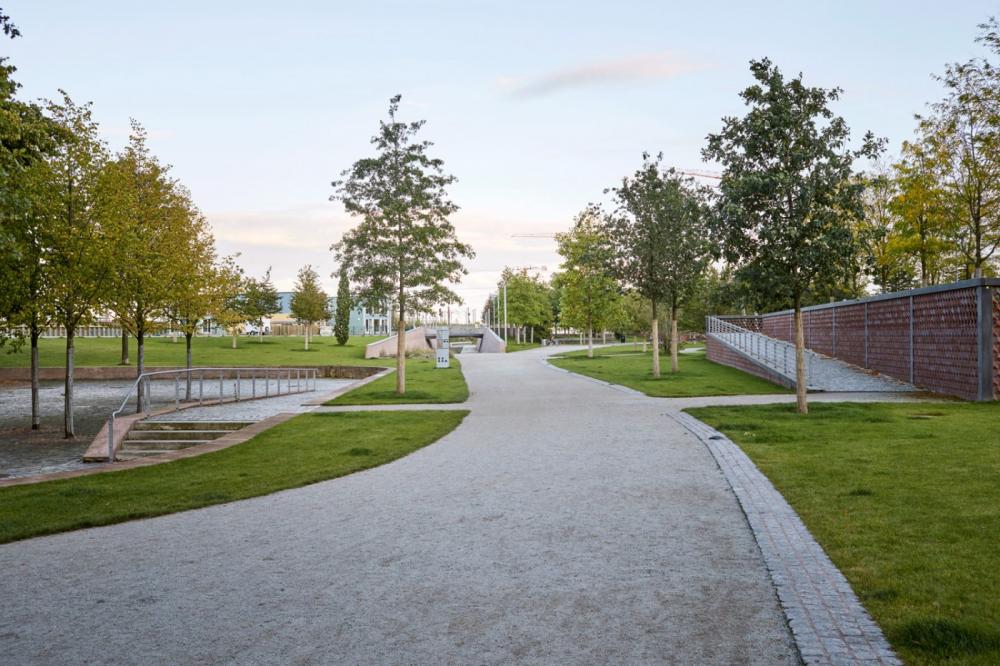 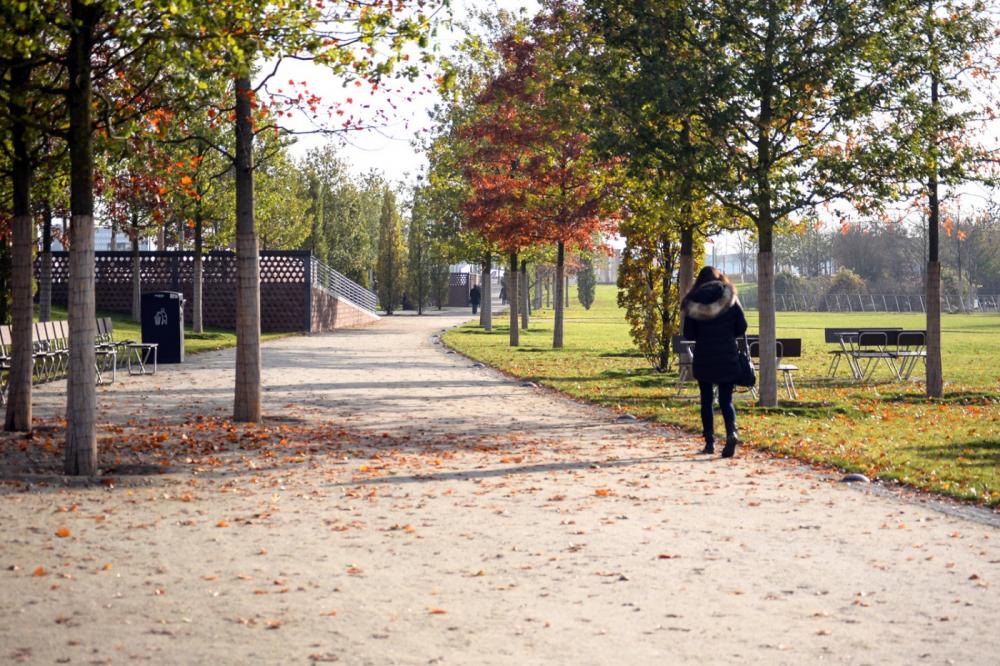 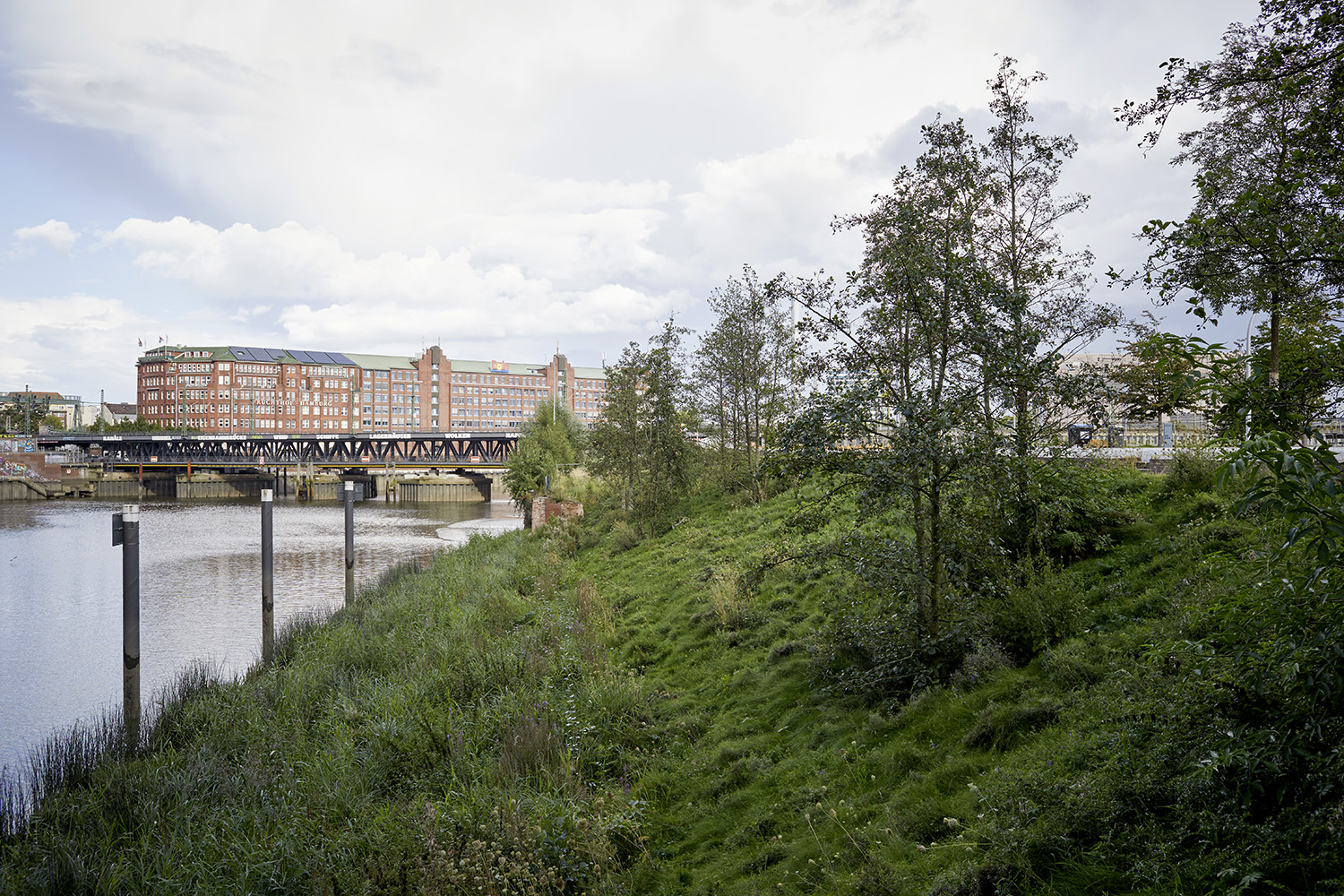 The main entrance leads via planted terraces, which act like bastions, projecting into the park as enclosed landmarks. Spatially part of the park, they mediate between the built structures of the city and the actual open space. The honeycomb clinker brickwork used for the retaining walls and parapets of the terraces, was specifically designed in an extended process. Not only does it embed the site in Hamburg’s architectural tradition, but its pleated form and perforation break up the monolithic character of the otherwise massive wall.

Lohsepark, with its spacious lawns for games and sunbathing, is 1.5 meters below the level of the streets and promenades and bordered by a rich collection of familiar-looking trees and shrubs. The park features unusual places: the so-called follies. A small grove contains hornbeams grown in quirky shapes; a piece of fenced-off “wilderness” shows how a fragment of landscape evolves without human intervention; and the grotto, with its layering of tamped concrete and various inclusions such as shingle, peat, and even glass, creates an unusual space for children, complementing the other play features in the park.

The Historical Level - A Memorial

Lower still, precisely demarcated by a further drop in level, are the historical sites: the architectural remains of the Hannoversche Bahnhof have their own visual idiom and recall the history of the station as the main starting point for the deportation of Jews, Sinti, and Roma during World War II. Resembling a deeper geological layer, the site lies one meter below the park level and up to three meters below the city level. 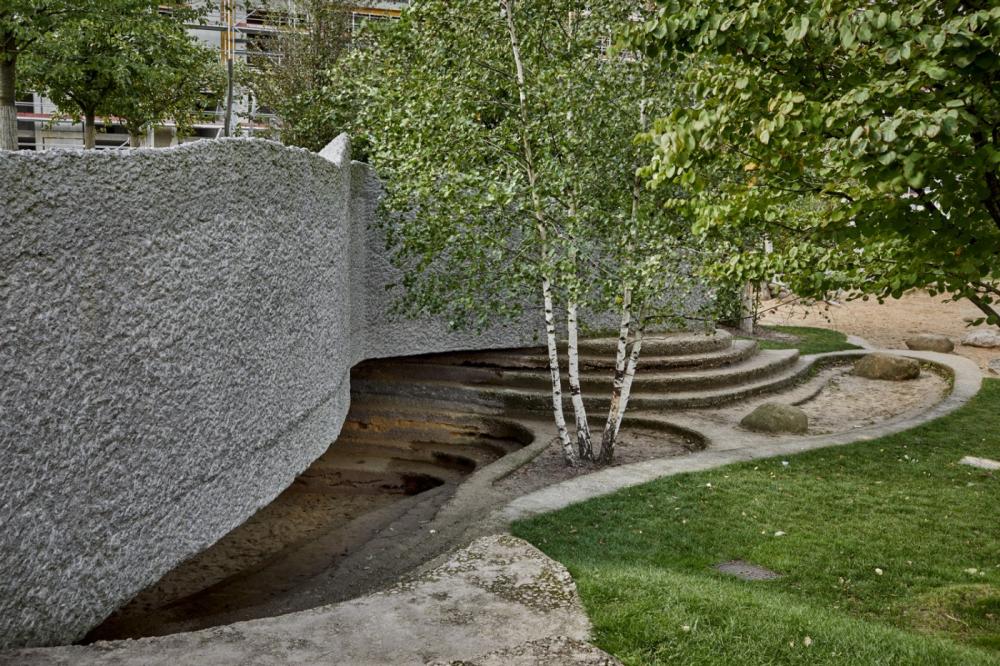 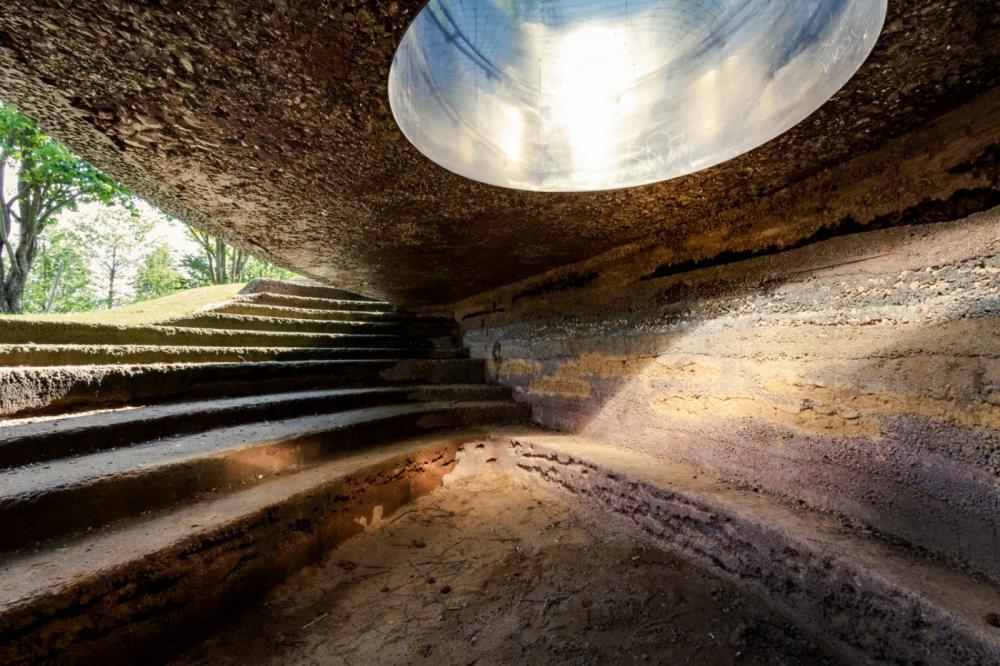 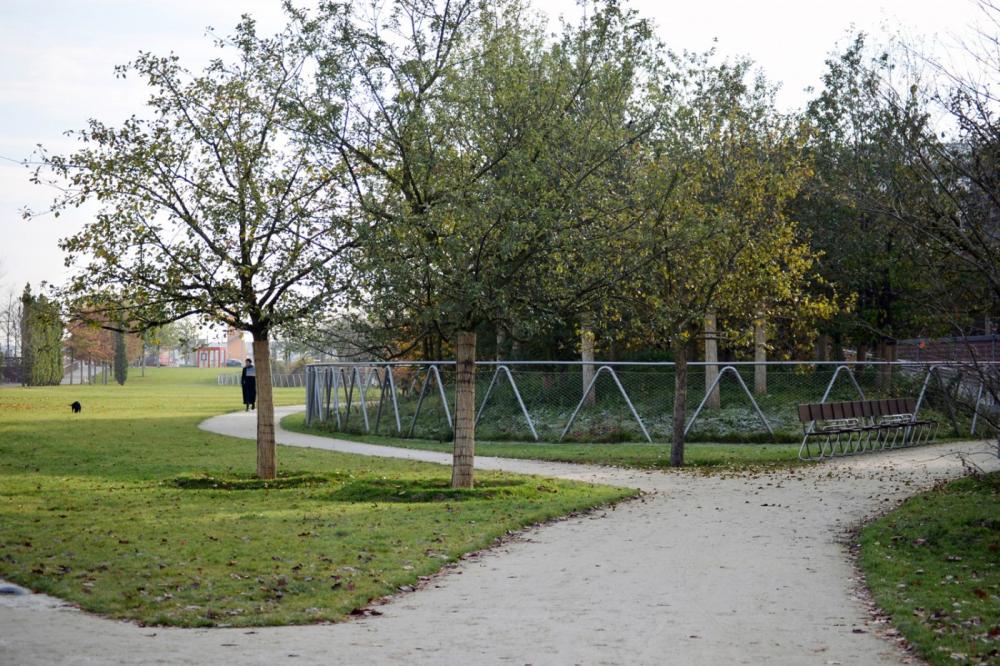 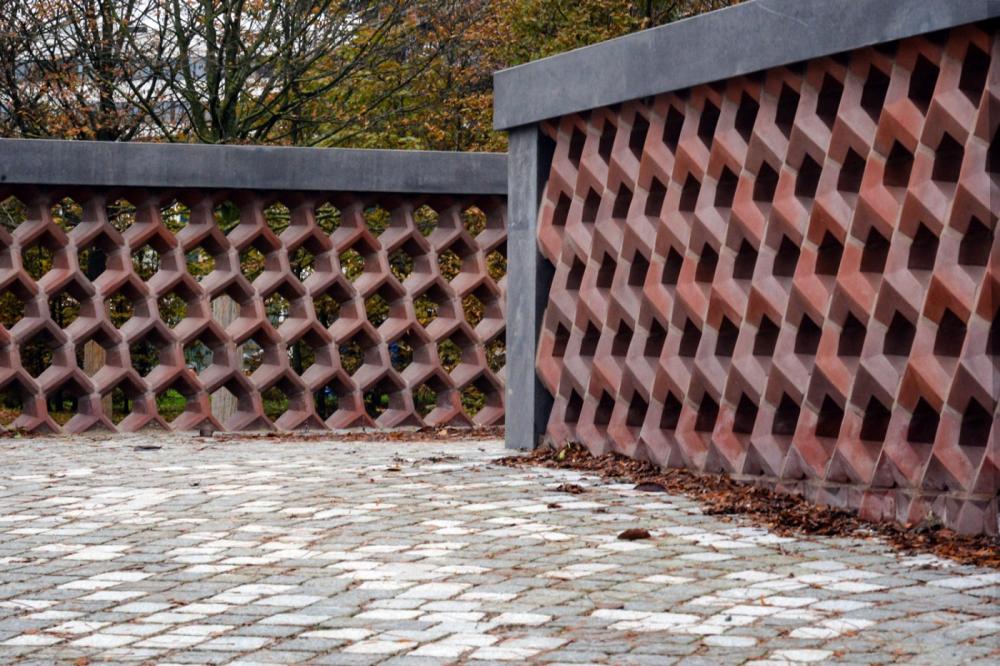 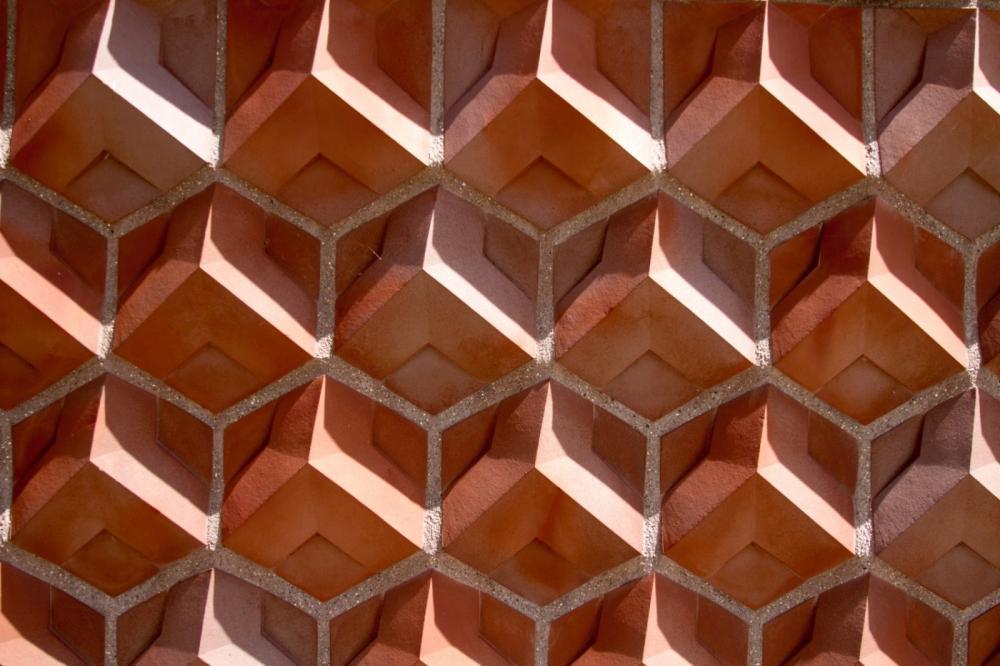 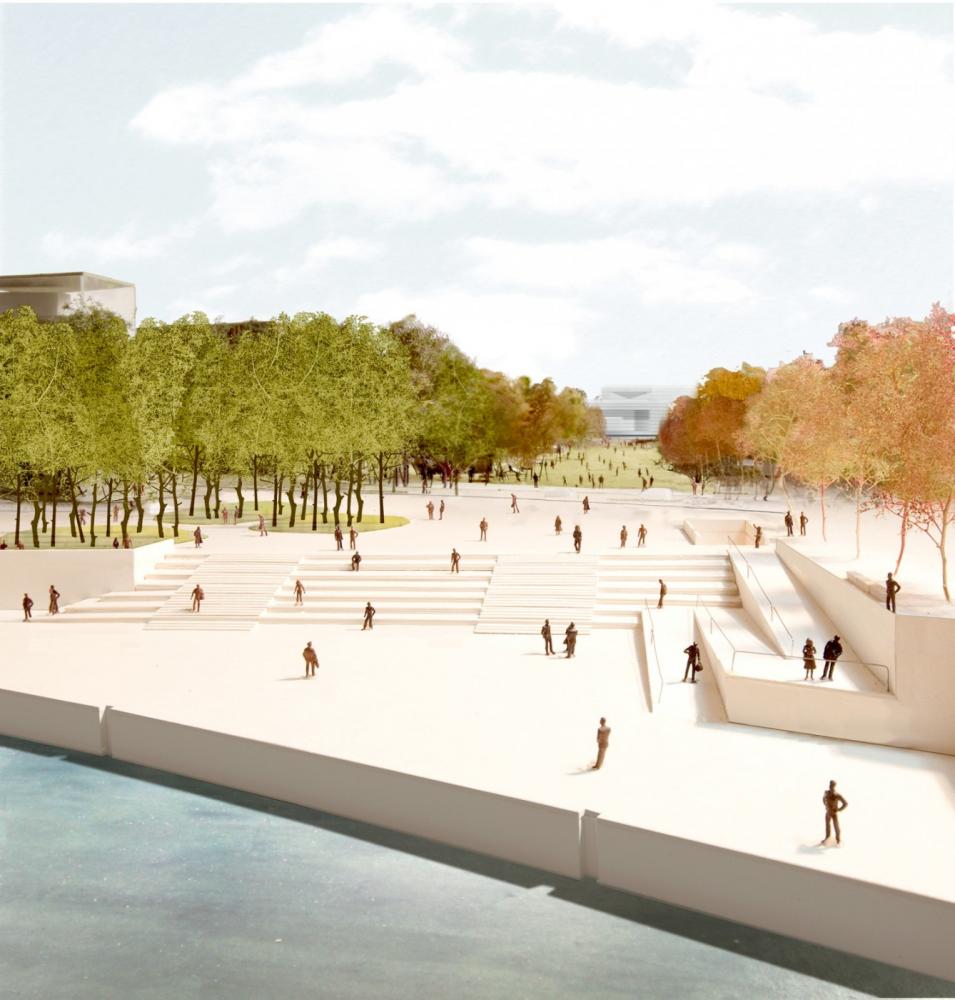 The Landscape Beneath the City