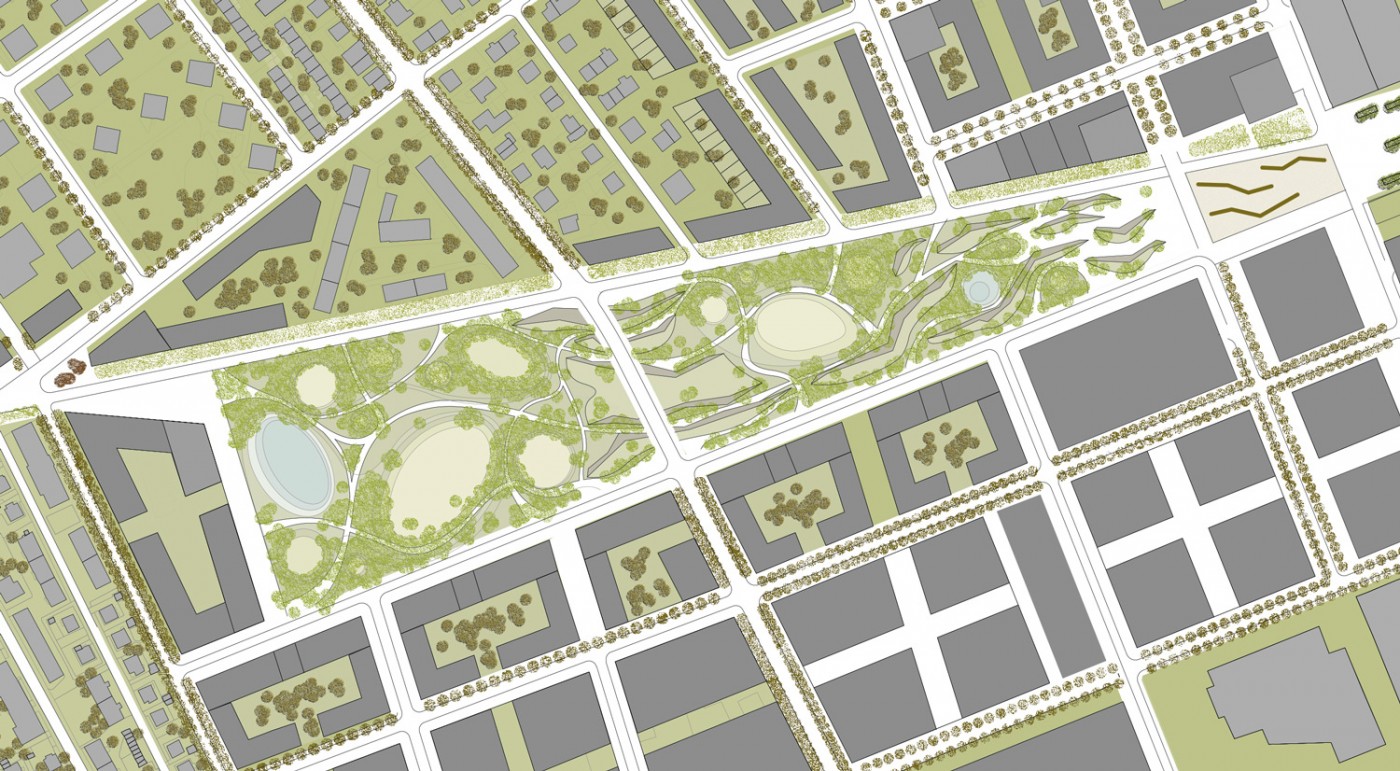 The Landscape Beneath the City

Under the direction of architect Jozě Plečnik, the city of Ljubljana has undergone major structural changes since the 1920s with the implementation of comprehensive urban renewal plans. Assertive and monumental architecture and boulevards aimed to establish links with major European metropolises such as Vienna, Berlin, and Paris. Some hundred years on, the Šmartinska project is to be another major step in the city’s development—this time using different strategies. The new part of the city is shaped by organizational principles and open space typologies such as squares, promenades, and parks. Their design does not seek to reproduce traditional patterns and images. References to the specific Slovenian landscape beneath the city are intended to characterize the open space and emphasize local differences.

Karst landscapes can be found in various forms in many parts of the world. They invariably develop out of limestone, gypsum, or saline formations, which are dissolved by weathering or carbonation when factors such as rainwater, atmospheric carbon dioxide, and a humid climate combine to cause erosion. Because the country features a considerable amount of karst—which was scientifically examined for the first time here—this type of landscape is closely associated with modern-day Slovenia. This is also illustrated by the etymology of the term, which derives from the Slovenian kras, a word that has its origins in the Latin carsus meaning «rock» or «stony, barren soil». 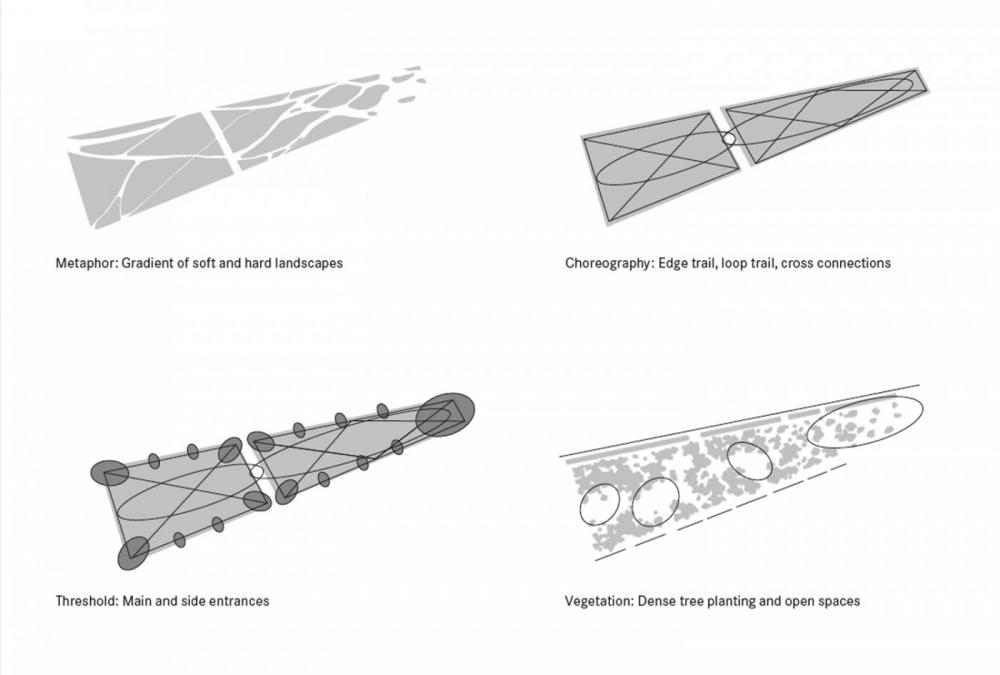 While usually, a landscape can be mostly surveyed by analyzing its surface, this is not possible with a karst landscape, because a substantial part of it is below the surface, where it no longer functions as stable bedrock but is reduced to a crust between different strata. It takes a section view and scientific maps to relate the visible to the invisible. To understand the phenomenon of the Slovenian river with its seven names, you have to be aware of the invisible river stretches flowing through the karst, and partly through the famous Postojna Caves: Trbuhovica, Obrh, Strzěn, Rak, Pivka, Unica, and Ljubljanica had previously been considered to be different rivers with their source and outflow in the rock, whereas in reality they are just names used to denote the visible sections of the same watercourse.

Even the vegetation of the karst can only be understood by knowing the processes that formed the landscape. An analysis of the vegetation maps and the characteristics of the tree species studied conveys a mental image of mighty forests, but what is found on-site is perplexing: the lack of soil formation and poor storage of water and nutrients result in the emergence of miniaturized forests shaped by the wind, with mature oak forests reaching a maximum height of ten meters, the same size as the native smoketrees (Cotinus coggygria)—the scale and species of an urban front garden transposed to the vast Slovenian landscape 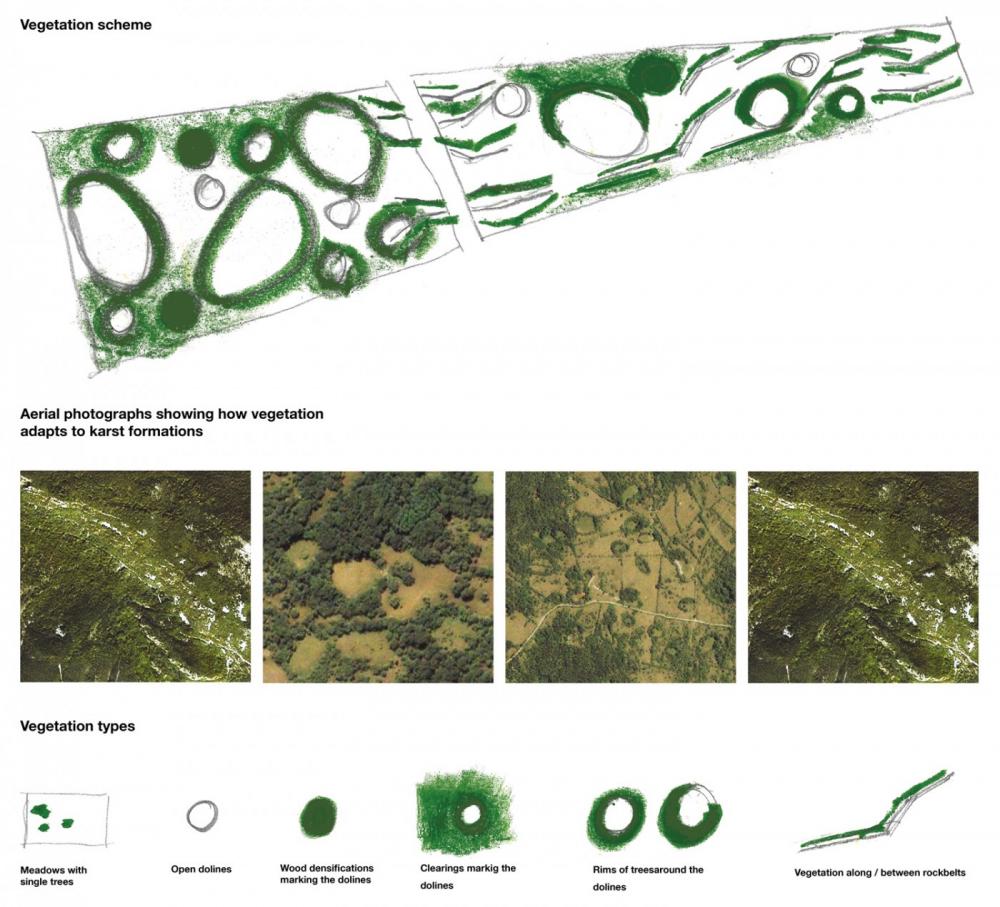 In order to exploit the accumulated knowledge in the design, the material had to be condensed into its essential aspects. Using simple schematic diagrams, the different geological rock formations and images of the vegetation were interpreted and translated into superordinate design principles. In the new quarter, these principles appear in different degrees of intensity in all the open spaces —parks, squares, and promenades—but are most clearly visible in the central park. The different kinds of karst provide a rich vocabulary—alpine (limestone, beech with maple), pre-alpine (dolomite, oak with hornbeam), and Dinaric (sandstone, hornbeam, poplar, and alder).

The design of the vegetation and topography from west to east shows the progression from covered to open karst. The western part, with its high proportion of trees and light depressions reminiscent of dolines (sinkholes), appears as a rather scenic playground and sunbathing lawn. In contrast to this, the eastern area shows a mineral, urban character, with the paths framed by stone walls based on the geomorphological phenomenon of limestone pavements (slabs called clints crisscrossed by deep fissures called grykes). The perception of the watercourse is reinforced by the vegetation, from hornbeam woods to groves of alder and poplar and groups of oak trees. A nutrient-poor substrate also causes a disconcerting form of dwarfism in some groups of trees. The connecting element is water: while in the western part the scenic impression is enhanced by a body of water that grows and shrinks in size depending on the quantity of rainfall, the underground watercourse in the transitional area is only partially visible or audible, before it reappears in the eastern part in the form of an artesian spring. 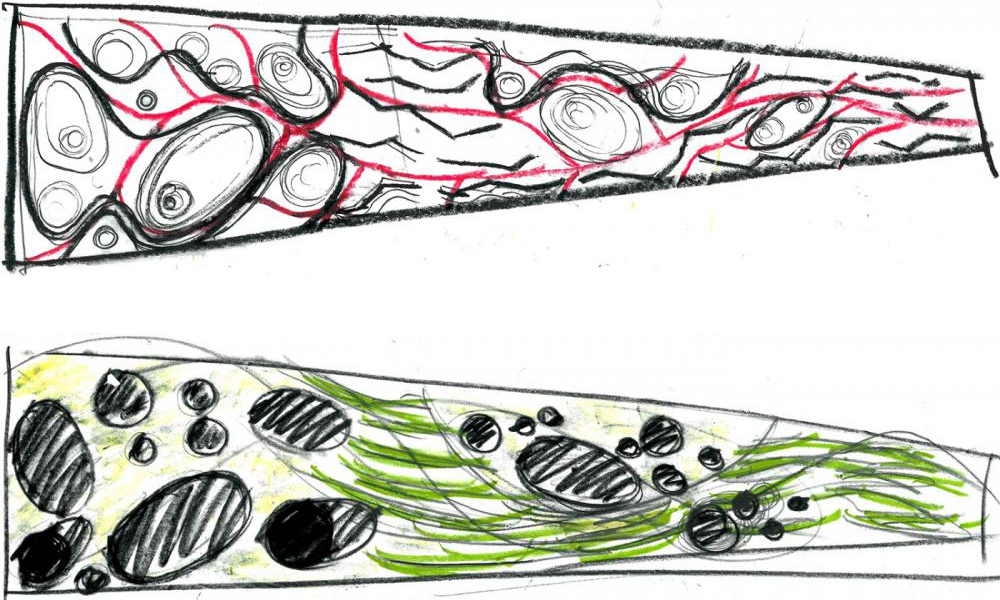